Ok I'm not being funny or a miserable old git or anything but I just have three words - ChewbaccaMom - really?

If you have spent the last couple of days in a cardboard box or doing something meaningful you may have missed this phenomenon but the 130 million people who checked her out on Facebook clearly haven't.

So Chewbacca Mom is Candace Payne from Texas. She goes to Kohls to get stretch pants but ends up getting a Chewbacca mask instead and takes a selfie as she laughs hysterically. Errr and that's it.

The Washington Post is writing analytical pieces on her transformative role in society.

Payne's video is a "reminder that life is filled with simple pleasures," it states. "Even with all of the negativity in the world, you can drive to Kohl's, buy a toy under $20 and crack yourself up alone in your car. it's uncomplicated, It's not stressful." the Washington Post states.

I have to say I found myself imagining the newsroom and the conference when some editor asked for volunteers to write about the transformative effects of Chewwy Mom. Suddenly all eyes go to the floor and pencils tap nervously.

Back in the day I recall the news editor lobbing a curveball at my features team when he wanted us to write about Dido's Thank You and how it was doing so well because everybody wanted to be happy and smiley and all that nonsense before he disappeared to the bar to drink himself into an angry stupor.

At least Dido had talent on her side and wasn't just famous for cackling to herself in a car. I guess one clutches at straws for amusement in the age of Donald Trump.

Far Away Footie and Liverpool Blues

One of the worst deprivations I face living in the USA is watching footie from afar. I've never been a big fan of the U.S. version which features more shoulder pads than an episode of Dynasty, a statement that ages me badly, helmets and lots of stopping and standing around while men fondle odd shaped balls.

Football is called soccer in the US. It always pained me to come to terms with the word but a rather ill-fated episode of coaching under 5s last year, reconciled me more to the S word. I'm not sure if I was a great man (or child motivator for that matter). It's never a good thing when you are celebrating the end of the season at Pizza Hut and the kids start asking who you are. It's a long story really. As part of often acrimonious and unnecessarily costly divorce proceedings, I mentioned a time when the ex had resisted putting the 5-year-old into a local soccer club. 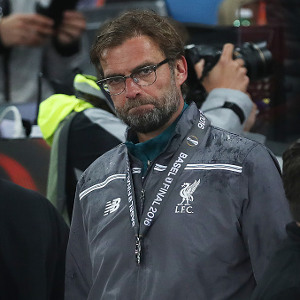 
The ex later enrolled him and even volunteered to be a head coach. The pressure was on me to coach an opposing team and I agreed. It soon became clear coaching 5-year-olds was not my bag. The sodden fields of Portsmouth, Virginia seemed a world away from the glory nights of long ago when Liverpool pulled off some of their greatest triumphs in the heart of Europe.

I'm not sure why I started supporting Liverpool but I believe it was a reaction to the elementary school bullies who were promising dire consequences for anyone who wouldn't support Manchester United. Withstanding the daily mortar attacks of snot projected across the class on rulers, it was still worth keeping my principles intact.

Supporting Liverpool was exhilarating and ultimately frustrating but never dull, But from the other side of the pond you often walk alone. Even when you can watch matches down the pub, there is little atmosphere and none of the old cheering and tribalism. The closest I came to recreating the mood was the game between England and the USA in 2010 when Liverpool captain Steven Gerrard scored early on, only for a pathetic fumble by the England goalkeeper to level the score. Watching England is usually an exercise in futility. That world cup was no different.

I had a better feeling yesterday when Liverpool squared up to Sevilla in the Europa Cup final after a breathtaking run in. I quickly ran into logistical problems. The game was scheduled for 7.45p.m. in Britain which was 2.45 p.m. in the United States. That's not an easy time to slip out of work. It was apparently possible to view the game on YouTube, I checked it out and received a message that the service is "not available in your country."

There was nothing for it but to 'watch' the game on live updates on BBC and the Guardian's website, although news of Liverpool's first goal was shared first on Facebook.

I started to wonder if I could get to a pub for the glorious second half. That's when things went slightly pear shaped and Sevilla scored three goals. Even with 10 minutes to go, I half expected a trademark Liverpool escape act.

I felt gutted but at least  had not broken out of jail to watch a fiasco. At some time in the night, I checked my phone and read an Egypt Air jet had disappeared. I started to imagine all those families waiting at the airport for a plane that would never land. it put my footie emptiness firmly into perspective.
at May 19, 2016 No comments:

It's hard to believe that in all the six years or so that this blog has been going, I am yet to publish a video blog even though those around me are doing it left, right and center.

So here's me making up for it. This video was taken at my kitchen table and it lasts just over a minute. About 20 seconds of prep went into it. If you are looking for words of wisdom, forget it. Still this does seem to be the way the world is going.

If Samuel Pepys were to be walking around with his famous diary today we'd accuse him of being a pompous old windbag.


Instead of waiting for Dickens' next installment, we'd be 'shove it up on YouTube mate.'

I have shot videos for media companies and anyone else who might be prepared to pay me a pittance for some time now. However, I try not to star in them. This one was taken on my iPhone and YouTube wants to do the shaky reduction on it. . All of which makes me wonder whatever happened to Shakin' Stevens and if he suddenly died would anyone notice. He could be dead already - we might not know. I digress.

I also forgot to do the horizontal thing. There's always next time, right.

Well the video was such fun, it was rapidly followed with Date With Dr. Diaper. This may seem like an irreverant chat, but it's actually a conceptual art project....

Walking down that cobbled street, I started to wonder if I had become a cliche of that kind of American who cherishes the historic. What was Upnor High Street in the grand scheme of things? Little more than an obscure lane leading down to the Medway - a couple of old pubs and some homes clad in traditional Kent weatherboarding. The Old Post Office was just that. The days when letters were sorted here were lost in antiquity. We posed for a picture. We put it on Instagram. We moved on. 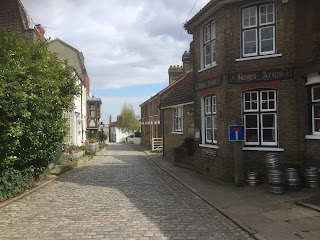 There was a smart model of a sloop beyond a crumbling window sill. Daffodils were pushing their way out of the earth in the boxes set out in the shady areas beneath the buildings and we could hear subdued laughter from a pub garden, although it was cold to be outside on that April day, cold but stimulating for the spirits. If you listened carefully maybe you would hear the shoots pushing up through the thin soil.

Upnor seemed like a strange place for a family get together. It also seemed as good a place as any. The street was unremarkable compared to Rye, Stamford, Lavenham, Shaftsbury or a host of other places. It only merits a few lines on Wikipedia and its castle is understated. Even so there was a temptation to don a pair of bright green flannel golfing pants and a pair of white sneakers and yell out "Gee this is so quaint." 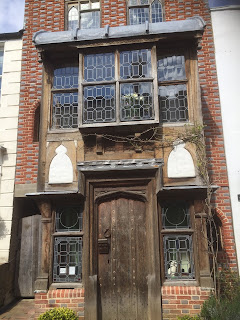 What do you expect when your leisure hours are haunted by too many strip malls, too much concrete. Functional is ugly but it is the utilitarian future. What use have we for cobbles anymore? The old sea captain's sloop will rot with the windows. The castle will be shunned and its curtain walls quietly closed off from visitors. It had been five long years since I have been back to Britain and the few days I was there opened and closed and now it's as if I never visited.

But there's something reassuring about finding things the way they are. The old people. Still there for now but just older. The same strange but reassuringly familiar oddities. The same family units, intact and at odds with the fragmented ones I have grown used to. I walked slowly down the high street. I breathed in the thin spring air and the fragile flowers and graceful windows and castle towers. And I wanted to hold onto a slice of it, to bottle it up and take it away with me like the most crass of American collectors.