Michael and Miranda crisscrossed the interstates together in her small gray car, from mountain valley to plain, the wind always rushing through the open window, the bike rack rattling.

The open road seemed to go on forever, her hand resting on his neck, his gently brushing her leg.


Like the song, it was a sorta fairytale. They could stop and start and pick back up whenever they felt like it. They could love and fall out and love again. They were constantly in each other's thoughts. They endured the miles. They lived for the next meeting. They lived for a day that never came.

The silver lining was elastic but it never snapped. Then one day Michael crossed a line. The bubble broke. Shattered car parts clattered across the road. Her final words were flat and cold. Words like rusty old car parts on the grass verge that had lost their meaning.

When Michael looked back down the highway it was empty, the road trips were a distant memory. Then he thought of the lyrics of the song.

"And I'm so sad
Like a good book
I can't put this day back
A sorta fairytale with you.."

Passion in the Garden - Vita Sackville-West and Sissinghurst Castle

On my recent trip to England, I was glad to have made the trip to Sissinghurt Castle in Kent, because the notion of the place has always fired my half-realized imagination. 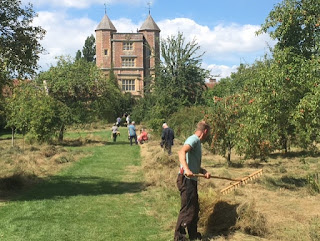 The idea of Sissinghurst provided a dimly-lit corridor to a half-forgotten but glamorous past. To the Roaring Twenties, the age of art deco and The Great Gatsy, when America was a place to aspire to and Britain saw a flowing of culture and art; albeit with one foot still stained with the blood of the trenches.

However, to experience Sissinghurst Castle is all about layering. To my parents, who had never heard of Vita Sackville-West, Sissinghurst was another garden owned by the National Trust and a tall tower. They had been before and declared themselves disappointed. However, they had forgotten about their previous visit by the time I suggested a day out. 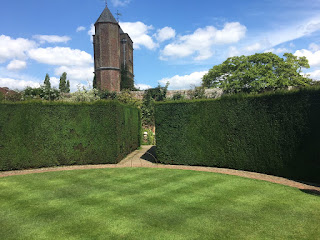 To my kids and my nephews, Sissinghurst castle was a great place to play hide and seek and to turn their nose up at the strange food in the restaurant.

However, for me visiting Sissinghurst was about experiencing something else, although I was woefully ignorant about Vita and her husband Harold Nicholson, I was captivated by the idea of change and the way they conjured beauty from an abject ruin.

Sissinghurst was once a Saxon pig farm. In the 1700s, up to 3,000 French prisoners captured in the Seven Years War were imprisoned here. The conditions were vile and inhumane with poor food, stinking sanitation, and rife disease in the cells.

When the poet and novelist Vita Sackville-West and her husband Harold Nicholson purchased Sissinghurst in the 1930s, it was in a shabby condition and the fields around were used to grow cereal crops, the National Trust notes. 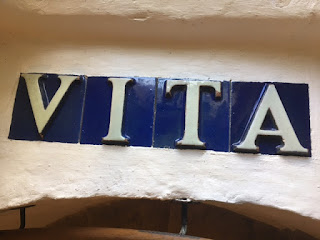 The garden they created at Sissinghurst became famous for its enclosures linked by vistas, and its harmony of color.

Sissinghurst contains the Cottage Garden, the Herb Garden, the Rose Garden and the White Garden, with its brick paths, geometric compartments, and foliage of abundant white and silver lilies, tulips, roses, lilacs, and dahlias.

Its iconic tower is stacked high with books and further down the garden, a small but alluring outbuilding contains a typewriter with a window opening up onto a sweep of the moat chocked with lily pads.

Vita the accomplished gardener is, of course, only half of the Sissinghurt story. Vita was the only daughter of the Hon. Lionel Sackville West and his illegitimate Spanish wife, Victoria and a Latin passion beat behind her fine English exterior. 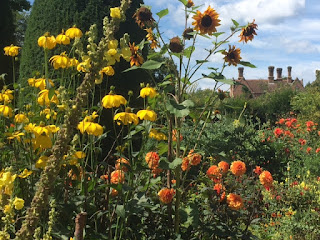 Vita is remembered for her sexuality and many affairs, most famously with the novelist Virgina Woolf. Vita was the muse for Woolf's revolutionary novel Orlando which circumvented the censorship rules in early 20th Century Britain, a place where homosexuality was not just frowned on but criminalized.

Vita was more than an author and a gardener. She wrote to an American penfriend. "As dusk falls, I come in and write the book I am trying to write ... and then I really feel myself in my tower, shut away. I become an author again and I am happy. But that is not the whole story." 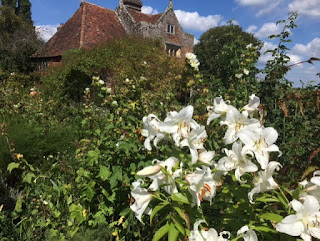 Vita wrote of her love for Virginia Woolf in letters to her husband, who was also homosexual.

In one letter she wrote: "Dined with Virginia at Richmond. She is as delicious as ever. How right she is when she says that love makes anyone a bore, but the excitement of life lies in "the little moves" nearer to people. But perhaps she feels this because she is an experimentalist in humanity, and has no grande passion in her life."

Sissinghurst was gifted to the National Trust in 1967, the year of my birth. Today it feels preserved in a cozy timewarp like many other National Trust places. The genteel elderly men and women who monitor the visitors to the tower would as likely talk about homosexual love as they would cannibalism on Easter Island in 1534. 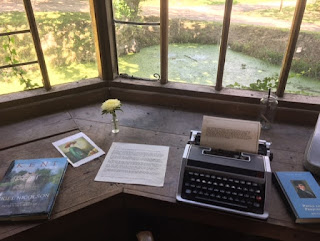 The gardens are a model of geometrical perfection. To walk down the brick paths and to smell the blossoms is to walk a scented path back to childhood. I visited so many of these places and the sun always shines. There is nothing wrong and jarring with the world. When we get thirsty we go to the tea room, when we get confounded, we head into a maze. There were never prisoners here, just the long and lazy acres of the rolling Kent countryside on a sun-kissed afternoon in England.