Bruno Catalano and the Art of Displacement

Next month I will have been in the United States for 10 years. It's an anniversary that chills me when I think about it because I didn't plan to be here very long. Some of the pain of displacement has gone but it can be hard on family occasions and birthdays to be separated by an ocean. 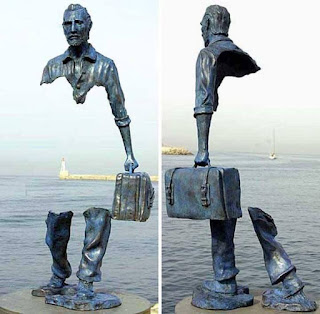 In the United States I have met two types of Brit - those who say they would never go back even if you paid them a lot of money and gave them a lifetime's supply of jammy dodgers and those who would readily go back but are trapped due to kids or other commitments. I suppose I fall into the latter category, although I am not naive enough to think if I returned I would not miss certain aspects of the US. When I first came here I was horrified by the vast emptiness of strip malls, the ugliness of convenience and the lack of quaintness. Today I have come to embrace the convenience of convenience and the fact I can drive out of my apartment and get anything I want within 10 minutes. In London I would have had to battle traffic or walked through downtrodden streets to a half boarded up store that have stocked a few out of date biscuits.

I don't miss the buses and train so much either - the smell of other people packed against me early in the morning, the chewing gum on seats, the stampede of feet. American embraces your individuality but it also may make you less tolerant. Because America prides itself on speed we don't expect to have to wait and we get more angry when we do. 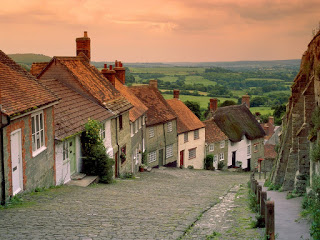 Although I would miss things, I often feel the deprivation keenly, particularly in the fall. When you grow up in and around the English countryside, you don't always appreciate its beauty. When you grow up in England, you can resent the days your parents forced you to visit a Medieval church hidden down a country lane where rooks have cawed from the tower for centuries. Only later when you look back does the wonder dawn on you.

When you drove across the moors you could curse the bleakness and the winding nature of the road. Only in retrospect do you see how the journey was as precious as getting there.

The French sculptor Bruno Catalano evokes the feeling of displacement in his new work in Marseilles in which his figures miss vital parts. When we go away, inevitably we leave parts of us behind, in some cases our whole being. The dashing poet Rupert Brooke who wrote of "some corner of a foreign field that is for ever England" was buried in an olive grove in Skyros during World War
One. 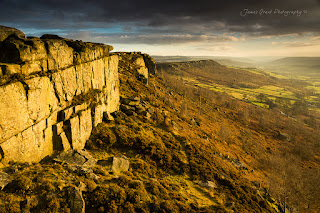 Yet this displacement can be more subtle; a displaced memory here and there - a yearning for the smell of wood smoke on a fall evening in the Peak District. There's a fear too that if we ever go back we will no longer be able to reconcile our memories with the present. And being a stranger in our home land might be far more frightening than being a stranger in a strange land.

A Languid Afternoon in Key West

The most palpable feeling at Hemingway's house in Key West is the drowsiness of the late afternoon caused by the thickness of the air and the tropical heat that can turn your clothes as wet as the late and great author's pool in the luscious grounds. 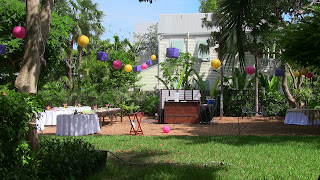 Everywhere around the great house bright and heavy flowers bend their dripping petals over the sunlit paths and the six toed cats that are descendants of his felines flick their tails contemptuously at visitors. Hemingway wrote some of his most vibrant works here - For Whom the Bell Tolls and a Farewell to Arms. The house was inhabited by a youthful Hemingway who drank hard and fished hard - but never at the same time. The  "Pop" figure, avuncular with a white beard was a later incarnation, although it's this figure that inspires the lookalike competition downtown. 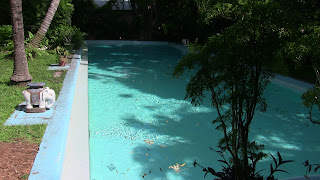 After barely surviving the humidity of the house we crashed on a bench and watched the preparations for a wedding unfold under a great verdant tree. We were entirely inconspicuous and the world went by without us. A wedding planner was scuttling around, a vibrant ball of spiky energy so at odds with the languid afternoon. We watched the old people in their starched shirts looking anxiously at their watches as if marking out their limited time left on earth and the kids bounding across the grass. Even from a distance we could figure out the family dynamics - the black sheep brother who showed up in a dirty T-shirt and handed a surprised guest his cigarette, the bustling business woman making bitchy asides at the appearance of the bride. Still we were transfixed by this odd and antique ordeal, so much ado and energy about two people seeking to get a fix on each other, when we knew the transient and shifting reality. 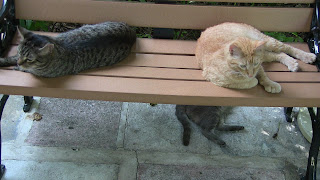 Although we knew there haphazard and transient nature of life and love, modeled on the great man himself who went through wives like his novels, we felt curiously tranquil in the garden and supremely at ease with each other. 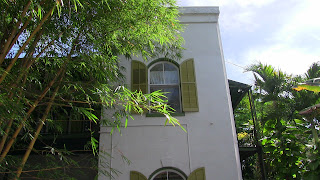 You could have taken someone else

You should have taken someone else

But you should never go on trips with someone you do not love.
at September 14, 2015 6 comments:

Meandering Through the Forgotten Heart of West Virginia 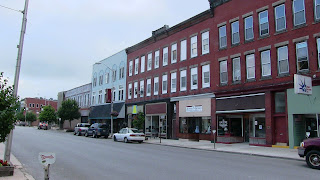 
So we drove south with little general idea of where we were going. It was suddenly good to feel the control slip away, to round one of the numerous curves to find a small battered town in the folds of the hills, clinging to the side of the mill or factory that provided its life blood. Everywhere in West Virginia there are ghosts of a past that once throbbed to a stronger industrial beat. West Virginia was once a place where men were men and women - well cooked and hid a few pennies away in the hope they would not be spent on moonshine. There are still parts of West Virginia that are like this as fracking booms. But much of the state seems happy to slide away into its past.

We were hopelessly lost and stopped for a while to wander around Elkins, a not unpleasantly run down kind of place in the heart of the state with some imposing main streets. The people in the hardware store had a problem with the map concept but directed us to a visitor center in the station. The lady behind the counter looked like she hadn't seen a visitor for a couple of weeks but could not have been more helpful. She pulled out a map of the state and offered to highlight the route to Sumersville. I told her I'd be fine without the highlighter. Still she seemed a bit concerned about the likely fate of a British guy and two kids in the heart of West Virginia without even the help of a highlighter. "Be safe," she said as I departed. By this time I was starting to wonder where Deliverance was set. 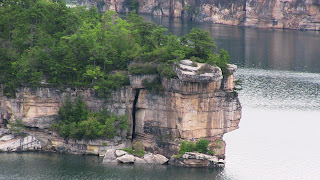 
Half an hour later we were back on the road. Zara was navigating and I was beginning to wish I had taken up the highlighter offer. We arrived in Summersville just over an hour later and found a strip of chain restaurants. At Shoney's I was able to observe another curious West Virginia phenomenon. While the young waitresses were always chatty and went above and beyond to help with directions, the older staff seemed to be involved in a perpetual struggle to keep their bitterness in check. Maybe it's something about living in West Virginia for a long time, although it's hard to imagine when you have a pretty stretch of water like Summersville Lake in your back yard.

We camped at a site on the lake with a pool, mini golf and a large bouncy structure that facilitated much bouncing, although not by me. Camping can be like this with kids. You have to counterbalance a night with spindly spiders with some of the luxuries of glamping. 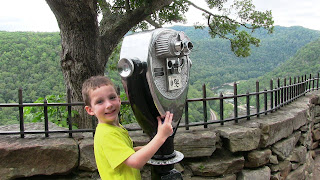 
West Virginia may lack spectacular tourist attractions but the New River Gorge Bridge is one of them. Opened in 1977, the New River Gorge Bridge is the third highest bridge in the United States and one of the most famous landmarks of Appalacia where deep wooded gorges and valleys have presented obstacles to the population for centuries. The kids were transfixed momentarily before asking if there was anywhere to play laser tag nearby. In the event I disappointed them, taking them on a drive down the gorge to a remote place called Thurmond where an iron bridge and a station house shimmered in the afternoon heat. We walked past a row of buildings that used to be the main street and the kids suddenly became engaged. After the railroad arrive here in 1892 Thurmond became an unlikely boom town. There was a passenger depot here, a freight station and an engine house. The population of the town swelled to thousands and there were hotels, stores and meat packing facilities. 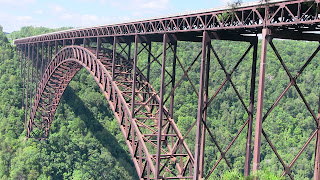 
In the first two decades of the 20th centuries Thurmond handled more freight than Richmond in Virginia and Cincinnati in Ohio combined. The Dun Glen Hotel hosted the world's longest poker game - lasting a mere 14 years. 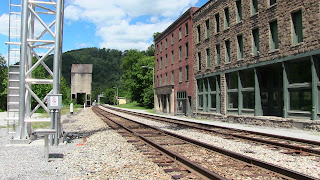 
Fire, prohibition and ultimately the demise of steam did for Thurmond. Today it's just a row of empty store fronts, preserved with a museum feel for the few visitors who make it here. It's a ghost town but maybe the ghosts have departed. As we walked among the crunching fragments of the town beside the railroad line with the remnants of my nuclear family I got to thinking of demise and disintegration. There are the grand plans and the industry and the bustle, followed by the slow release, the breaking apart, the bitterness and insanity and ultimately the beauty of nature that descends again from the hills and carpets all around it in its embrace. Then one day when we return and walk back along those railroad lines that were once hard and uncompromising and find beauty once again in the ruins.
at September 07, 2015 8 comments: