Missing that British Service Culture - Not So Much

I was back in Britain earlier this month. I wasn't sure if I'd recognize Britain post-Brexit and all that. This time, I was happy to be able to travel there with the kids but was wondering how more Americanized me would cope.

I'm not saying I've got to the stage of referring to trainers as sneakers and wearing white ones. But nor do I say trainers much anymore because people Stateside give me a funny look and can't work out why I'd be wearing a personal trainer.

Although I still found some people here who were jealous about the notion of traveling to the Old Country, others shuddered at the thought of flying to London, imagining it to be in the grips of a Syrian-style Islamic war. 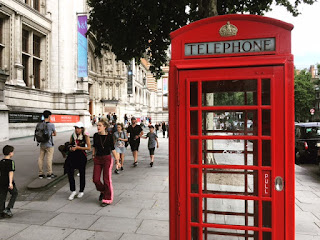 We flew on Virgin for the first time and it was a rather delightful experience. The hostesses smiled sweetly when they talked about tea. It was everything we Americans expect from Harry Potter land.

The immigration staff were jocular, unlike their American counterparts who are usually reaching for the plastic glove at the first hint of a shifty look.

Even the car rental place was easy to deal with this time. We are not going to mention my confusion at finding three pedals rather than two and having to ask a surly Croatian how to start my tiny rental car.

However, it started to unravel a bit on the M25. Not only was the traffic even worse than I remembered it, but those lost hours started to catch up with me and I found myself nodding off at the wheel.

In the end, I was forced to pull off at one of those hellish places called a Motorway Service Station. When it comes to motorway facilities, the United Kingdom seems to have stood still. There were no new facilities and the ones that remained were as grubby and unedifying as ever.

We stumbled half asleep into a Costa, which is like a pedestrian Brit version of Starbucks. I asked for an Americano. The acne-ridden guy behind the counter who looked like he's been on a youth training program since 1988, looked at me blankly and said "wot."

I repeated my request. He said "wot" again.

It was a shock to realize he couldn't understand my pseudo-American accident. After much pointing and grunting, I made myself understood.

Not that this was the end of the ordeal. A piece of paper went down the production line to a lady who was clearing out a coffee filter in slow motion. No amount of throat clearing was going to speed her up. She was enviably oblivious to all around her as she filled up the cups with an agonizing lethargy. At this point, the urge to become all American and start yelling came over me. I resisted.

I propped up the counter for about 15 minutes as she shunted to my order. Then she suddenly went off on a break and I was faced with acne boy.

We finally supped our insipid coffee and over sweet Bakewell tart as I realized how much I didn't miss the British service culture.
at August 31, 2017 5 comments: