Collective groan. It's that weird holiday I don't understand again when people do that turkey thing a month before Christmas - just because. Don't get me wrong. I can understand July 4. I even celebrate it. We escaped home out of the mosquito-ridden swamps to get some decent tea. But what's with Thanksgiving?

Still, at some point in the early afternoon I'll be invited over to the ex's to be quizzed on the whereabouts of the turkey and reminded about how I forgot to buy rice crackers in July, 2013. I will then be forced to point in the direction of the 40 pound cat. 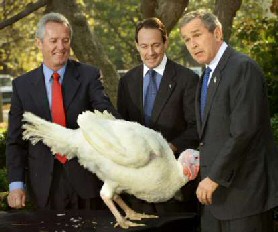 If you want to know more about the historical roots of Thanksgiving you can read my blog Why I'm Still Feeling Queasy after Thanksgiving.

If you can't be bothered here are Five Quirky Facts about Thanksgiving...

1 Hundreds of Thanksgiving days were observed in New England in the 17th Century. Only one church record refers to a feast and there is no further record of a feast for 150 years. Stop stuffing yourselves people - it's historically inaccurate.

2 Although pumpkins have their origin in the New World the first recipe for pumpkin pie appeared in a British cookbook...so naaaaa

3 Sarah Josepha Hale is credited with making Thanksgiving a national holiday. In the days of slavery she believed the holiday would break down America's sectarian tensions - a move that has clearly worked perfectly. She was one of the first women to write a novel and is credited with the verse Mary Had a Little Lamb But She Ate Her Pet Turkey Instead.

4 In 1835 the doctor William Alcott wrote that he was opposed to Thanksgiving on moral reasons as well as medical reasons, lambasting it as a carnival loaded with luxuries. He was also a vegetarian.  if he were alive today he would probably be breaking out the Ramen Noodles - just not the chicken flavored ones.

5 The most famous Thanksgiving poem was written by Lydia Maria Child. It's called "The Boy's Thanksgiving Song" and is best known by it's first line "Over the river and thro' the wood." Nope - sorry - never heard of it but will probably be heading for the woods by 6 pm.

I haven't worked in marketing for long but long enough to have started waving a red flag at the notion of Bill Cosby's latest Twitter campaign. I don't always do these things as forcibly as should so I would probably be standing meekly at the back of the Cosby suite, waving a small red flag and mouthing the word 'no.'

But it would certainly have been red. Not even remotely orange.

So here's a man who has been accused of a number of  rapes. Oh well then - let's invite people to form a meme campaign around his glittering, sublime, oh so funny, and not in the slightest bit scary date raping personality (allegedly etc).

The results were a bit predictable... 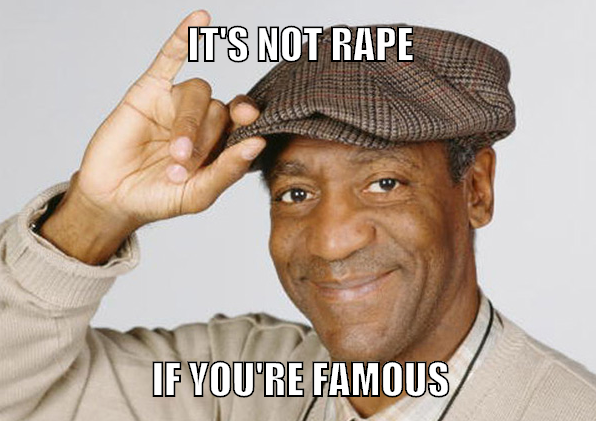 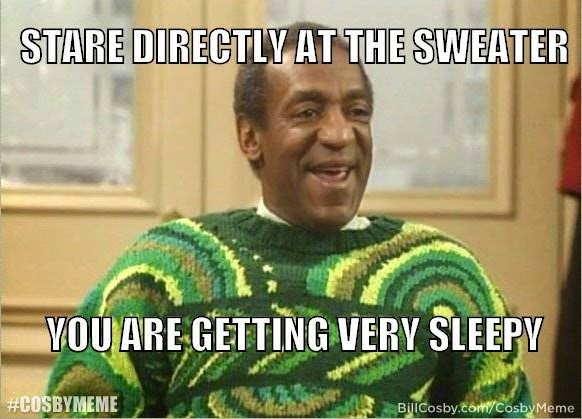 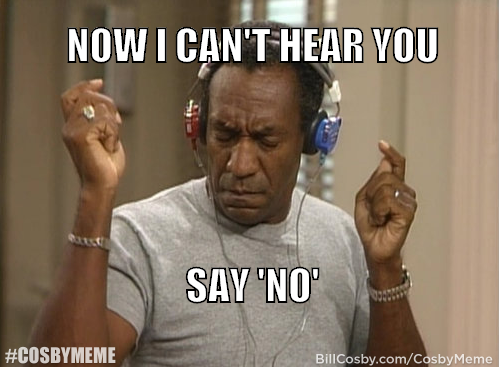 Although this post is in a semi lighthearted vein there's nothing funny about the accusations leveled against Cosby. They date back to the 1970s but only now are they gathering momentum. One of his alleged victims Barbara Bowman claims Cosby drugged her and raped her.

The episode makes me think of Sir Jimmy Savile and anything that makes me think of Sir Jimmy Savile is not good. The famous British DJ and TV host was lauded as a character while he was alive. The stories about little girls were laughed off. Sir Jimmy was influential and did lots of good work for charity. After the death of the venerable Sir Jimmy, the lavish commemorations and the commissioning of statutes of the great man, those allegations of sexual abuse came into the open. It was later revealed that Sir Jimmy had sexually assaulted hundreds of victims of both sexes from the ages of 5 to 75. Sir Jimmy's tawdry soul got away with it because he was a star.

I'm not equating Cosby's alleged acts with those of Sir Jimmy who may have been one of Britain's most prolific sex offenders. But there is a certainly a similarity in the willingness of the establishment to turn a blind eye.

I Miss Our Little Talks

I also loved the song because of the feeling of northern solitude it gave me; it make me think of Beowulf and the frigid forests of Scandinavia. It made me think of lands where monsters came out of the mists. It made me think of the fearsome Norse Gods and the long ships on the freezing waves. It makes me want to drive to the nearest IKEA and to buy a van full of uncomfortable beds called Bjorack, or something of the like.

I miss our little talks but know now I was shielding myself from a truism - namely that the heart isn't a coherent whole. It can be divided into many pieces, each one attractive enough and shining like pale glass on the beaches of a fjord on a bright morning, but ultimately as illusive as the sun in these rarified northern climes.

The Sirhowy Arms Hotel Cannibal and the Map of Love

When I read about Matthew Williams who attacked and ate a woman at the former Sirhowy Arms Hotel in Argoed, Blackwood, I was forced to pull up a Google map.

Where in the world was Argoed and how could such an unsettling thing have happened? The news reports pointed to somewhere in Wales. The former Sirhowy Arms Hotel was now a halfway house for homeless people. I had written about such places in sleepy communities across Britain back in the day. Local people never wanted them on their doorstep, thinking they would encourage undesirables. The normal reaction was to label such folks NIMBYS (Not in My Back Yard) but some of the elderly residents of Argoed, may have had a fair point after Williams' sickening attack on a woman he appeared to had a relationship with.

Some locals said the halfway house had been the source of trouble. "We's even had people sleeping rough overnight in the hedgerows," said one villager. I was a bit perplexed by that comment as sleeping rough in a hedge did not seem to be up there with cannibalism.


In my efforts to find out where this had happened, I pulled up the map and expanded it. The familiar shapes of the Welsh valleys came to me and Cardiff and the majestic River Severn. It was close to the place I had grown up and I was surprised by the feeling of homesickness that swept over me. I remembered that gray day, when the water was as a gray as the milky sky and the mud lapped on the Severn and we pulled a mighty fossil from the river bank, the mud lapping on our shoes. The ammonite fossil was a relic from a prehistoric sea that had lapped here long ago millions of years before Gloucester was the great strategic crossing of the Severn.

I had never thought of Gloucester as a lovable place but slowly it unfolded in the map of love. When I grew up in Gloucester it has lost the strategic significance it had in Roman times when two roads crossed at The Cross, In Medieval times a vast cathedral had risen in Gloucester but it seemed out of place back in the days when I wandered through the avenues of quietly crumbling half timbered buildings past the largest expanse of stained glass in Europe.

The serrated green lines to the north of Blackwood marked the Brecon Beacons, where majestic hills rose like a whale with a smooth back. To climb up their expanse on a sunny day was to ascend to heaven and to look down on a lake like a mirror. The long contours of the mountain range proved to be a map of love and hate. On a day when the mist hug heavy over the mountains I had ascended into the dankness with V. hoping the breathless heights would revitalize our relationship, only to be met with a litany of complaining and the inevitable downward descent. 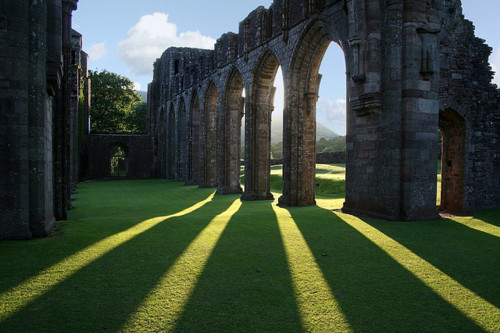 
But to the east the map proved to be more sunny. I saw the Black Mountains and the ruins of Llanthony Priory, one of the prettiest places in all of Christiandom. The memories came flickering back - a smile and a sea of purple flowers winding away to the high hills.

Then I thought of the Golden Valley and how we had woken to see the mist drifting down the river. We had made a pilgrimage here after seeing the movie Shadowlands. The Goilden Valley proved to be illusive and beautiful in an understated way associated with places off the beaten track. We drove through small villages and ate in stone pubs and heard the lilting accents of Wales just over the border. The land of song and dizzy heights. 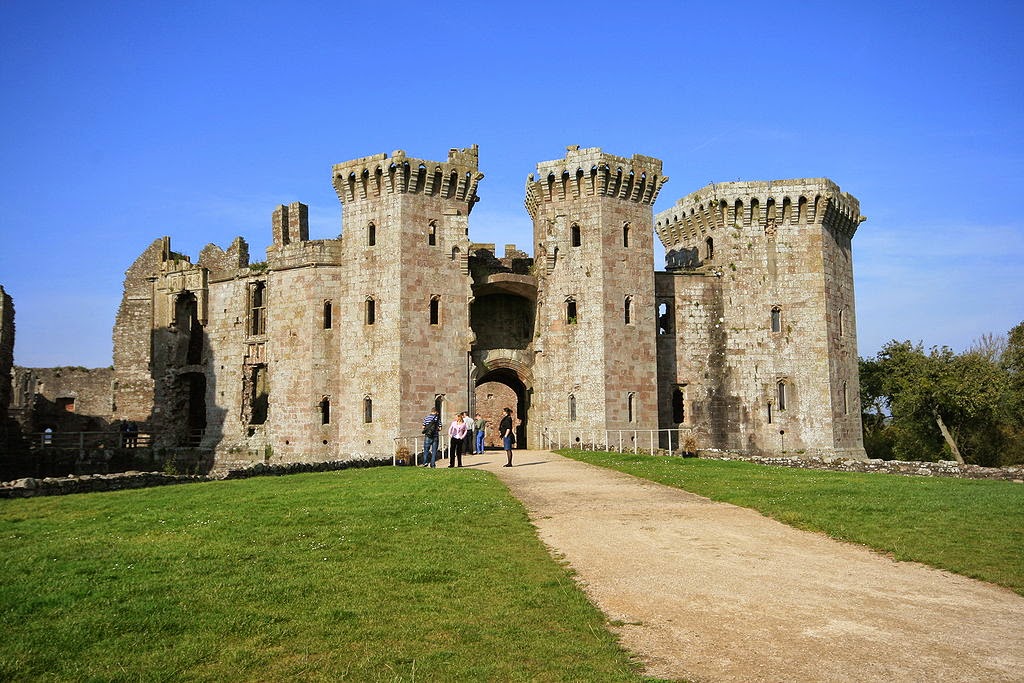 
Then we drove along the border past the savage ruins of castles that marked the days when this place was the Gaza Strip of its age. When you walk through the old gatehouses and see the holes where burning hot ash was dropped on attackers, you feel a chill even on the warmest of days.

Perhaps the map of love is not so far removed from hate and cannibalism - the flip side of the human condition that we don't want to contemplate.
at November 09, 2014 4 comments: