Sock it to me

I have no sympathy for some of the figures in history who claim to have had dilemmas.
Did Julius Caesar agonize about crossing the Rubicon? Did Napoleon think should I, shouldn't I invade Russia and have to eat his horses? What about Robert the Bruce in his cold, abject cave when he saw a spider struggling to build a web and resolved to try, try again?
Tis all insignificant compared to the dilemma I have every morning when I attempt to find matching socks.
There are days when I've woken up earlier than the rooster for an early assignment or my red eye course on a Saturday. I've had enough time to slowly read War and Peace backwards, underlining all the names with "ski" in them.
Still, one way or another, I have come unstuck in the socks pile, lost my temper, hurled disparate apparel at the cat and ended up running out late wearing one red sock and one blue one.
My course colleagues didn't buy my excuse I was making a patriotic gesture.
My wife can't believe I own so many brown colored socks by the same manufacturer of such crazily different designs and periodically asks me if I was on LSD when I chose them at Wal-Mart.
Well, of course you have to be on LSD in Wal-Mart just to survive the experience.
To be fair I've never taken LSD: I was concerned by those drug talks at school when they warned you about 'flashbacks.' Admittedly if you got a flashback and you were again in Wal-Mart I'd call that a bonus.
In retrospect buying a job lot of the same socks would have made a lot more sense but mornings just wouldn't be mornings if everything matched.
at March 24, 2009 No comments: 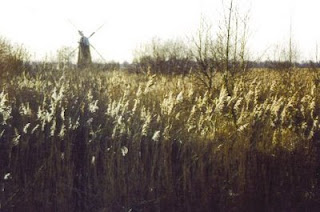 I'm a serial misser. The longer I live, the more I miss. It's a problem I'll have to start managing before I start missing the missing half of my breakfast cereal before I've finished it.
Here's what I miss in no particular order.

1 - Britain; almost everything about it, my family, the way rain clouds can grow suddenly out of a pale blue sky and the reassuring medieval church spire that rises from the hazy fields behind my parents' home. It's like nothing bad can happen with that view even though it was probably the last thing peasants saw as the black death claimed them back in the Middle Ages.

2 - The gentle contours of the Norfolk Broads from How Hill with its antique wind pumps and the sail of a wherry drifting down an unseen waterway.

3 - The fields of bluebells that carpet hidden glades on the Cotswold escarpments in March.

5 - Driving into Pately Bridge on a spring day after rain with the daffodils choking the verges below the drystone walls and the village pond.

6 - Eating a searing curry in Brick Lane looking onto a street scene more Calcutta than London.

7 - The Corner House and its characters, the councillor who celebrated his flatulence, the red eyed man who called you his "buddy". The second pint and the realization work was about to get a lot more interesting.

8 - The ever increasing cast of characters consigned to the past like a play half remembered, a pair of piercing blue eyes and a curious nose, the Hugh Grant caricature, a man with a face like a Groucho Marx mask, a ginger haired man, even.

9 - The myriad coffees with my friends when I never wanted the cup to empty.

10 - The House of Commons terrace bar on the nights when the street lights blurred and sunk into the Thames.

11 - The days in Paris when we were too enamoured to leave the hotel room and got to the Sacre Couer at 1 a.m. when they were turning off the lights.

12 - The villa in Positano and the way the dome of the cathedral caught the gold of the early morning from the table in the lemon grove.

13 - The day I picked up a shining new Buick in Vegas and knew the long, open highway was mine.

14 - The stars that overlapped in the whorl of the Milky Way that night on the beach in Brittany.

15- Fires on a cold night in the forest and the faces of long lost friends that rose and fell in the flames.

16 - The days when I could run like the wind on the beach and not care about a thing.

17 - The ruined monastery, swallowed up in moss beside the shallows of an Irish river.

18 - the sound of the choir rising and falling with the breeze in the cathedral close.

19 - the yellow and pink rose bushes we planted in our garden before the tenant let them die.

20 - the chaos of the parties, the intrigues, the embraces, the giddy unpredictability of being carelessly young.

21 - The hours spent at Watersmeet poised above the rushing waters with my camera.

The shadows don't fall so long in the new world. I walk through vistas and pass out the other side without my feet leaving an impression. The angles are sharper, less forgiving and the sky is a solid blue drawn in by an artist with a paint gun.
If I return to the old world will I miss the new one? Most certainly.
at March 12, 2009 2 comments: