The Most Annoying Song of the Year = # Selfie

It's only April (I think it's still April); which is, of course, the cruelest month boasting the sinking of the Titanic, the Hillsborough tragedy, the Boston marathon bombing and the capsizing of a South Korean ferry, not to mention the A to Z Challenge. Have I smugly mentioned how I did not do it this year? Only 20 times, right.

Also by April I already have a winner for the most annoying song of the year. This one is a radio channel changer, one that makes me jerk my hand to the dial - or as my local radio station states "Put your Nob on Bob," and desperately switch channels as the car veers across lanes.

The song is #Selfie by the Chainsmokers and it sums up all that's wrong with our gadget, Instagram, Twitter, selfie obsessed society: "She's such a fake model. She bought all her Instagram followers." I also suspect it's something of a satire.

On Ashes to Ashes by David Bowie

If there is one song that sums up the madness and complexity of the world it has to be Ashes to Ashes by David Bowie.

I love this song, and not only because it reminds me of business as usual ie. that sense of walking on Mars feeling like a clown as a large tractor threatens to swallow us up but the fact it contains the line: "I've never done good things, I've never done bad things. I've never done anything out of the blue."

Well perhaps I have loved too much and too recklessly but at least I can say I have not hated with an equal vigor. Still I feel bad for making others feel bad and there's that proverbial thin line that stalks me in my sleep and threatens to flip me from one side to another like a shutter opening and closing -from good to bad, from black to white, in and out of the sun until I am dizzy from the infernal flickering.

Am I good or bad? The answer is probably somewhere in between but there is little room for shades of grey on a planet that's either cast in darkness or light - strung out in heaven's high, hitting an all-time low.

So what is the meaning of Ashes to Ashes? I'm sure there are dissertations on this subject. I think it probably means Bowie had taken too many drugs when he wrote this. Still I will never get over getting my fix of this song.

Why You Are Totally and Utterly Mad

It occurs to me that you are totally mad. You know who I am talking about you. Loopy. Bonkers. Three bricks short of a load and the load was unstable to begin with. Don't get me wrong; I am not mocking mental illness, even if I am the only person I have met in this country who doesn't resort to a rattling bottle full of pills. Rather I have come to the conclusion, more through passing observation than an empirical study, that most of us are a bit off keel. 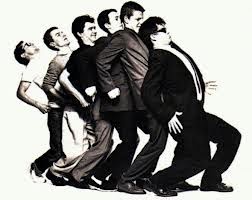 No, not that kind of madness - one step beyond

I have some examples.


1 He stands in my room and I see him shudder inwardly at the sight of my in-box. I know it has affected his equilibrium for the rest of the day.


2 She Tweets until 2 a.m. about the virtues of skinless cats. She complains about being tired the next day and bemoans the way her enthusiasm for the skinless cat is waning.


3 She talks to her feet on the sidewalk. When she sees I have noticed, she quickly pulls out her phone and pretends she was in a conversation with a party other than her toes.


4 She texts me and leaves voicemails in the night asking the price of my rental house, two days after I told her it was $999. She tells me she wants to strike a deal because she can't afford $30,000 a month and her grandmother has gout.


5 She writes on her blog that she won't be on her blog for a couple of days oblivious to the fact none of us are the sun and if we go out the whole world will die. Nope we are Pluto, lost, lonely, cold and insignificant out there fighting to be even recognized as a planet. But didn't we used to be planets? Just give me a week again as a planet damn it.


I can't chide people for being mad. There are seriously days when I look in the mirror and the lights are on but nobody as at home. Apart from the mice that have built a nice little home in my mind - thank you very much.


When in doubt blame Lana Del Rey. Gosh she is fantastic - when will I kick my obsession?

Zara wanted me to blog about her fossil hunting exploits. I was fine with the idea because it can be difficult to decide what to blog about, especially without the big pointy stick up the bottom that is the A to Z Challenge. But it's not all bad; I can lie back in a hammock and drink Margaritas, metaphorically speaking, while the rest of you wake up in the night in a cold sweat doing despicable things to your teddy bear, just because you have no idea what to write about for X. 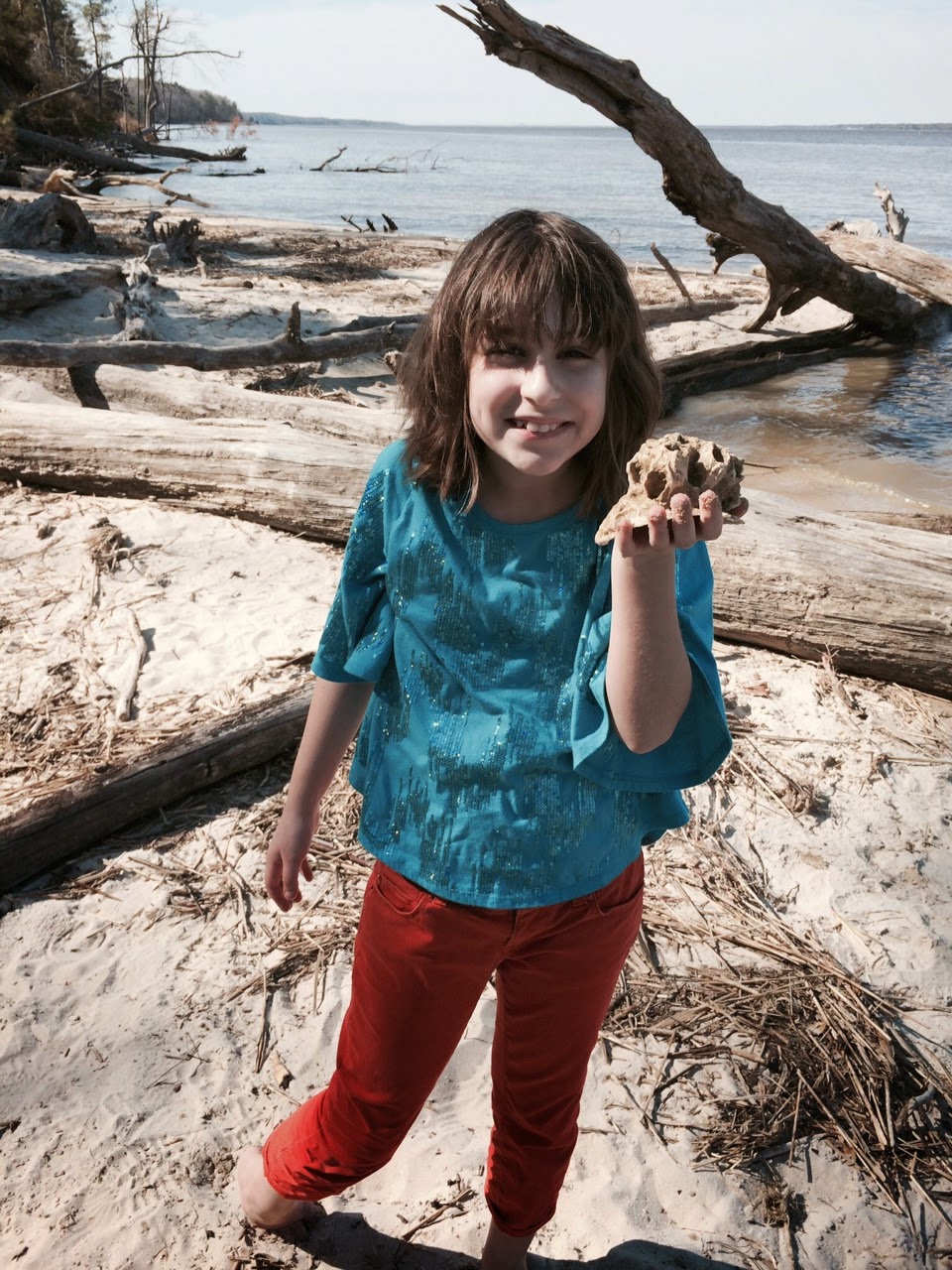 Yesterday we drove up to Fossil Beach at York River State Park. The kids were initially disappointed because they had spent an hour-and-a-half in a car only to be faced by a half a mile hike and a tiny secluded beach on the river that was not full of ice cream stalls like Virginia Beach.

But the lure of finding fossils on Fossil Beach took over. There's a huge pile of them at the top of the wooden steps as well as a warning that you can't take them away, which must please countless parents who don't want to wake up next to a dirty great fossil, which almost leads me to that story about my room mate who got hideously drunk and ended up in bed with his grandmother - I digress. 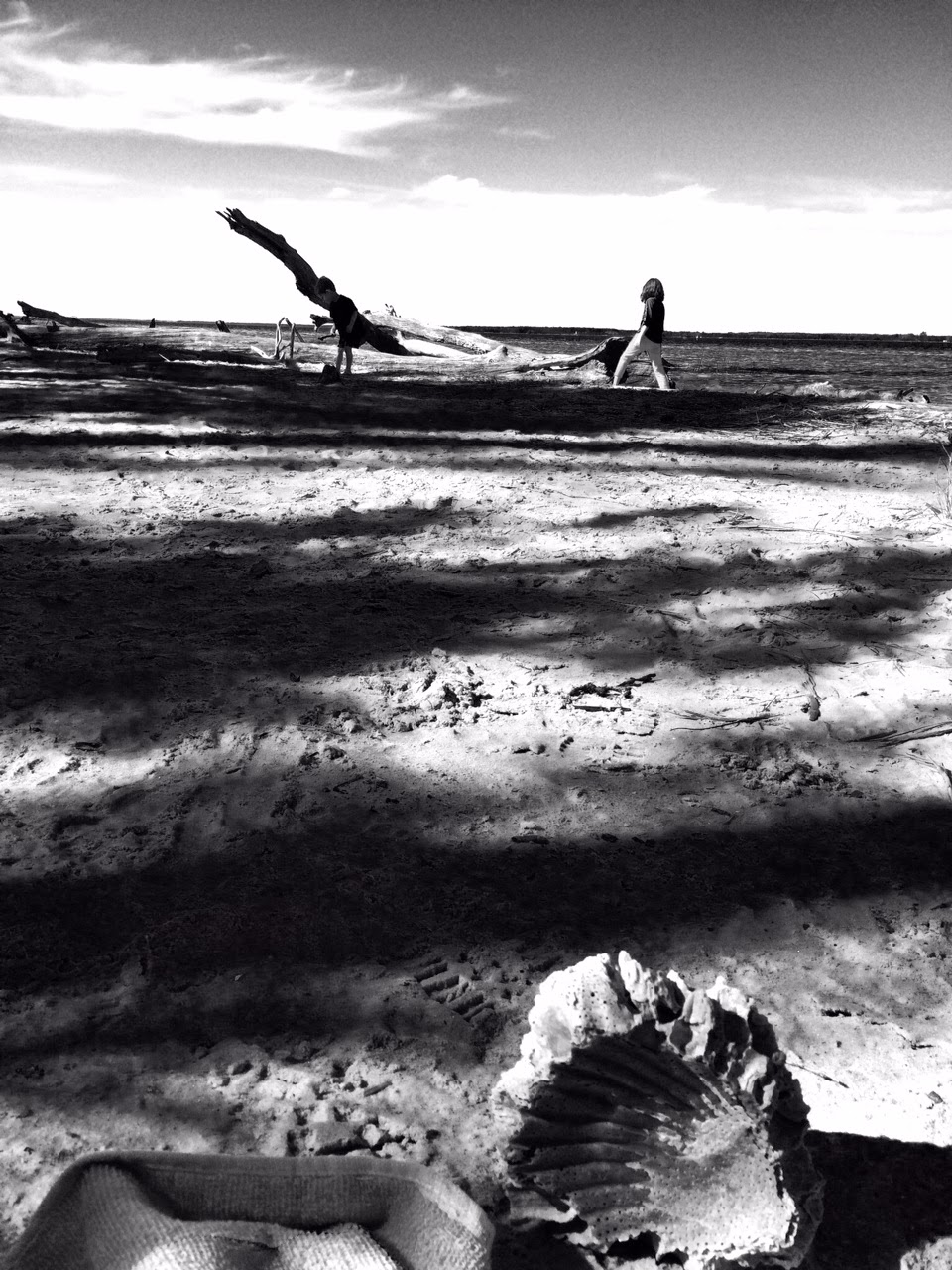 Fossil beaches are few and far between but I like them because they awaken the collector in the young imagination. Who can forget the leaden grey skies and the crashing waves of Lyme Regis where we pulled fossils from the cliffs back in secondary school? Who can forget the day Johnnie Briggs stole my prize ammonite and the long and bitter wait for vengeance that came in the form of liberal coating of joke slime that clung as nicely to his backside as it did his classroom chair. 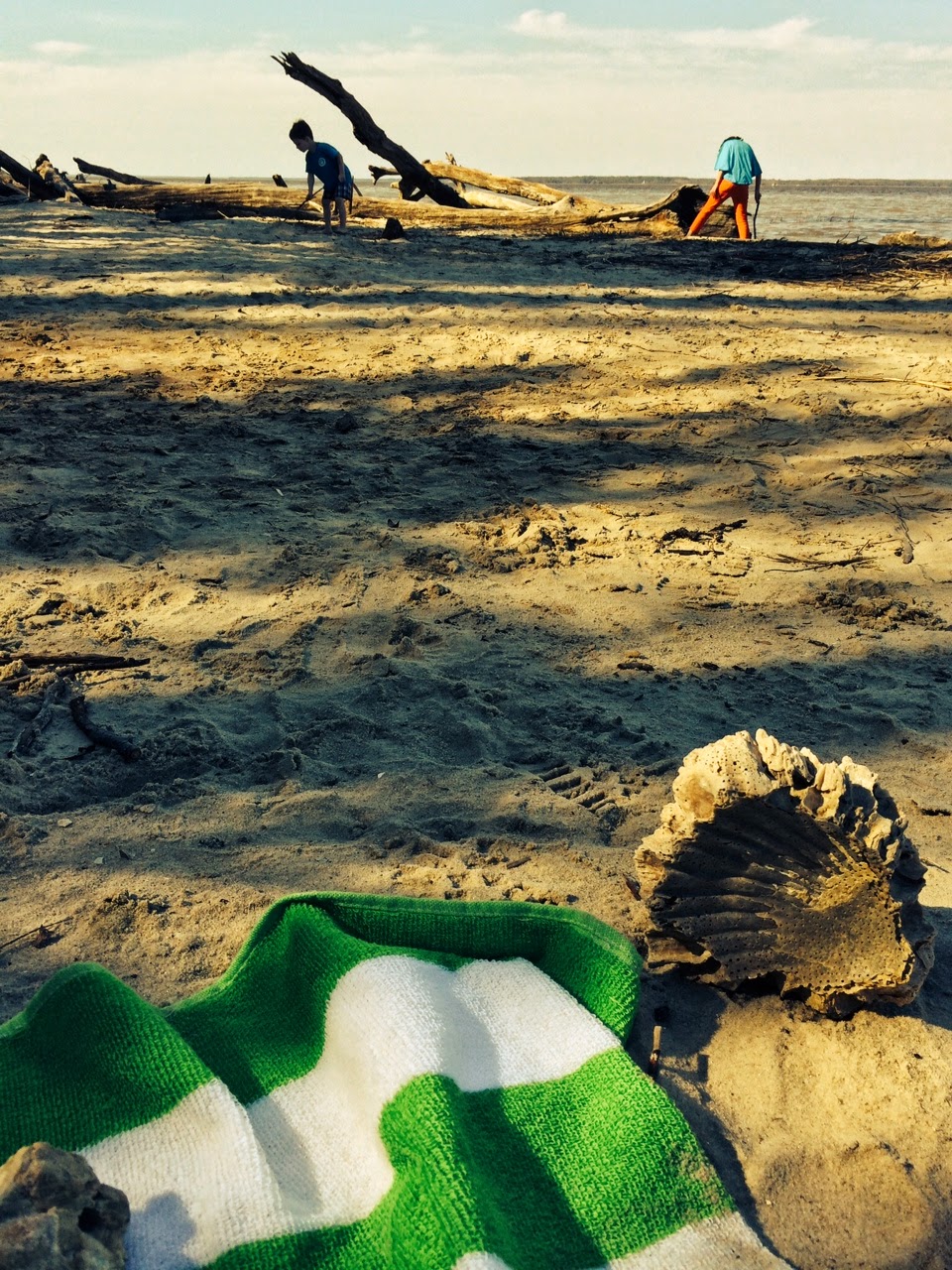 Zara liked collecting fossils anyway and had accumulated a hefty stash by the time the sun was falling low over the river. Jackson found one that promptly exploded revealing itself to be a lump of mud. The day was going splendidly until Zara trod on a sharp fossil, incurred a small cut on her foot, demanded a piggy back to the car and when I declined insisted on making a video to send to her mother about my cruel fossil hunting excursion.

A Tale of Three Camdens

I always liked Camden Town in London even if it made me feel old and terribly untrendy. Camden is grungy and edgy and full of street markets with New Age clothes and girls with dreadlocks and nose rings. The pubs are raw and ready and one strep away from spit and saw dust. 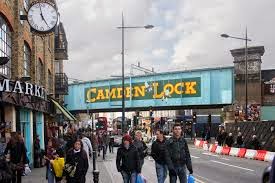 There are the catacombs which are not catacombs but grimy old railroad arches that host a dazzling array of the weird and wonderful accessed on the rickety Northern underground line. There are the railroad lines and the canals and the skeletons of heavy industry that has been refashioned as arts venues in cases such as the Roundhouse - a former railroad turntable converted into a theater. I visited it once to interview the director longer ago than I care to imagine. When the same sex marriage ban was overturned in England, Camden raced to be the first place to hold a ceremony.

Camden made me think of fuzzy nights out; the mingling of smells, beer on the pavement and the remote hope of bumping into Damon from Blur.

When I found myself in rural North Carolina reporting on the trivial doings of Camden County, I rued the comments of my friends who made the London comparison. Camden was and still is a backwater. Its politicians looked at me as if I had fallen from Mars and some of them made a policy not to speak. My backside bears the scars of long nights on the hard benches of the court house, listening to their deliberations about landfill applications. 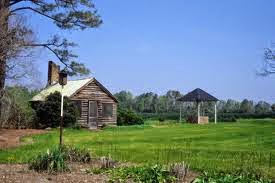 Although I have left it behind I am still haunted by the lonely swamps of Camden and find myself driving on its empty roads.

Then there is another Camden where I might think twice about setting foot in. Survey after survey highlights Camden, New Jersey as the most dangerous city in America.

"The first thing you notice about Camden, New Jersey, is that pretty much everyone you talk to has just gotten his or her ass kicked," reported Rolling Stone. 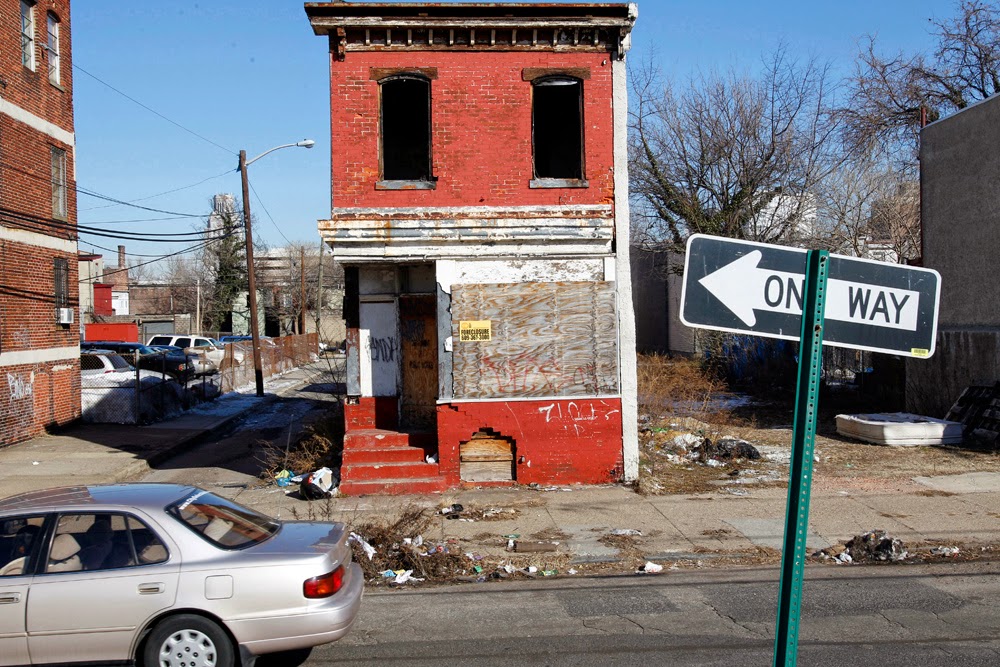 Camden is Detroit without the saving factor of tall buildings to avert the eye. It's drugs and gun shots and unemployment and racial tensions.

"It's an un-Fantasy Island of extreme poverty and violence where the police just a few years ago essentially surrendered a city of 77,000," the magazine reported.

Suddenly those quiet swamps don't seem quite as depressing.

BTW - good luck to all of you who are doing the A-Z blogging challenge. Thanks for the mention Jean about how my piece about not being bothered to do the A-Z Challenge, inspired to do it and good luck to Juliette for doing it on err umm doors. Also good luck to my old pal Mark who has taken the plunge from his Greek Island...