Brad Pitt, Johnny Depp and the Elusive Secret to Happiness

Here's something that has been troubling me. Not to the point of waking up and pacing but it's certainly a strange thing.

If we could be anybody who would we want to be? You can bet nine out of 10 guys would say they would want to be Johnny Depp or Brad Pitt, due to one or more of the following factors. 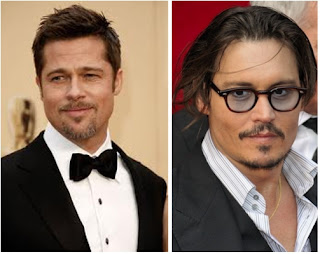 1 - Dashing good looks
2 - High octane careers as movie stars
3 - Unimaginable wealth
4 - Ability to pull just about any woman on the planet and probably quite a few on Mars or elsewhere.
5 - Innate coolness.

Yet when we read the accounts of the bitter break-ups between Depp and Amber Herd and Pitt and Angelina Jolie, some disconcertingly spiky words are dropped into the smooth mix - words like violence, alcohol, threats, drugs, and anger. Anger features rather prominently.

There's a cell phone video - admittedly used by Herd to obtain a restraining order - that appears to show Depp in an unintelligible rage. There are claims of an attack with a cell phone, drug abuse and Herd suffering bruises.

All of this should be viewed in the light of a Hollywood he said/she said kind of tussle.

However, there are well-documented instances of Depp losing it such as when he caused $10,000 of damage to a hotel room during a bitter argument with ex Kate Moss in 1994.

Meanwhile, all is not well over at Brangelina. Indeed, it has split apart and things got very unpleasant with the claims by Angelina that Brad Pitt was physically and verbally abusive to their kids while on their private plane, reports USA Today. He's now being investigated by the FBI.

Brad was reported to be wasted on a plane, verbally and physically abusive to a couple of the 20 or so kids and even tried to leave the scene in a fuel truck on landing. As one does after a mile-high bender.

So here's the kicker. You can have everything. You can be Brad Pitt. You can have the world at your feet and yet your life can descend into one long drunken trailer park brawl.

This is not without precedence. Think Elvis Presley killing himself on junk food and shooting up TV sets. Think Whitney Houston dying in the bath.

I'm a bit concerned about the electricity bill this month but now I'm not so sure I'll be much happier if I find the $100 to pay it.

I can't tell you the elusive secret to happiness. Maybe it's just be unremarkable.

The Sinister Clowns of South Carolina and Other Tales

These are frightening times to be alive in America. Ignoring the bombs in New York, there's the small matter of the scary clowns who are terrorising parts of South Carolina.

In Greenville County, SC, children have been telling adults about creepy clowns who hang out on the fringes of dark woods and try to entice them into the trees. The children talk about a house by a pond that's so deep in the woods that its windows afford no light. We're not sure if its walls are made of gingerbread. Police have visited the house but found no sinister evidence like stick-on red noses or bulbous shoes. Nevertheless, it gets the imagination going. I'm thinking of a nasty Ronald McDonald walking in the woods to the tune of The Cure's The Forest. 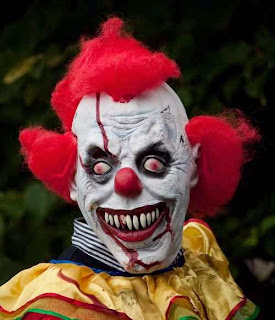 Personally, I think this is the last straw. As if terrorism, North Korea and Vladimir Putin threatening nuclear war wasn't enough, people are now dressing as scary clowns and trying to lure kids into trees.

There's also a rather sinister looking orange clown who's down to the last two standing to become President of the United States. Just gag me with a sneezy flower thing now.

It hasn't been as bad as this since 2014 when creepy clowns were showing their ghastly faces across America, including one who was seen standing balefully in public places clutching black balloons.

I noted then how the World Clown Association became concerned that these incidents were giving clowns a bad name. To echo the prophetic words of Father Ted "Down with this Kind of Thing."

I also noted there is a word out there for the fear of clowns - coulrophobia. Make sure not to spell it coolrophobia. Clowns aren't cool kids. And whoever thought they were funny in the first place was probably on hallucinatory drugs.

If you are as old as me you might remember the days when the circus came to town. Not today's pale imitations but the big top stuffed with trapeze artists and lions, elephants and tigers.

Now ask yourself this question. Was there ever a kid who exclaimed to his parents 'take me to the circus to see the clowns.'?

The Last Day of Freedom

So this was it, the last day of freedom. We went to the pool on Labor Day early because we thought it would be packed but the lifeguard maintained a lonely vigil. The signs of impending closure were everywhere. The dirt and debris from the storm still lay at the bottom between the blue facade and the lifeguard apologized when he fished out a dead frog. Those lazy afternoons are over until May.

It seemed only last week when schools closed for summer and the kids faced long, sultry days free of testing and classrooms and the constant clatter of bells. 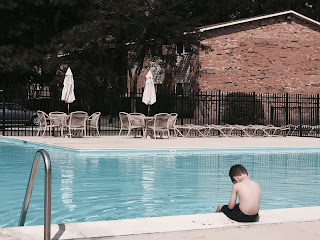 I knew I had felt sadder when the holidays were at an end and that joyous day when we threw our school ties in the hedge was a distant memory. In the interval, there had been long summer days by the lake, adventures at the disused railroad line and the obligatory family holiday.

We never went anywhere glamorous but the memories lingered in a deeper color than so many others. The cottage with the strange smelling 'garlic sausage room' and the thick leather chairs we would spin in, the garden alive with buzzing wildflowers, the hint of purple on the mountainside and the sgulls that cawed and wheeled high above the whitewashed alleys of St Ives. The simplicity was curiously powerful. Miles away there were kids whose parents never thought, or cared or just walked away into the deep vermillion Wild West sunset like the one we saw once simmering over the farm tractors of a Devon field.

I have tried to do the same. I took the kids to New York and the mountains of upstate New York. The trash blowing down the New Jersey street outside the motel was a light year away from those cliffs and bays of childhood memory but I hoped the experience would make a difference. They saw buildings that soared away from the pavements and dreams in stone and glass. I hoped one day they would look back in the way I do.

So it's back to school tomorrow and perhaps I'm more sad about the loss of their freedom than they are. Perhaps they don't even see it that way. The world has changed a lot and it's been more years than I care to remember.