Why Canada is Getting More Northern Exposure

There can be a tendency to dismiss Canada as cold and boring. On my first trip to Canada, I visited Windsor, a crushingly-dull low rise place across the Detriot River from Detroit.

from the well-manicured flower beds close to the waterfront I looked in awe at the high towers of Detroit, Michigan. The river was wide but the distance didn't muffle the police sirens. Windsor has a fraction of the crime rate of Detroit. I was fascinated and wanted to be over the river in the U.S. 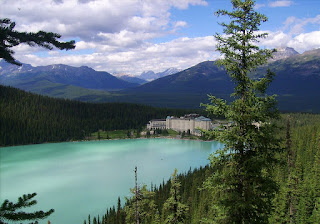 
It's taken some time and a curious turn of events but like many US residents, I'm now looking at those prosaic flower beds in a new light.

Canada has a popular and dashing progressive leader in the form of Justin Trudeau. America has grumpy, intolerant old men.

Canadians, like their country, can seem a bit cold. But they haven't perfected hate the way we have in the US and they still have the Queen on their notes.

It's probably no surprise that websites that help people move to Canada have crashed due to the weight of inquiries since Trump was elected.

Canada may seem like a somewhat kitsch place of Mounties and maple leaves but it can be cutting edge these days. Toronto has shed its image of being New York run by the Swiss to becoming a thriving Bohemian city.

Vancouver has always been trendy and breathtakingly beautiful, even if unaffordable. Canada remains cool in a climatic way, although global warming may ensure it's temperatures become pleasant.

As demonstrations choke America's cities, as police and minorities shoot each other dead, it's tempting to just lose yourself in the vastness of Canada's interior.

Wrap a thick fleece around you and stare out at the emerald waters of Lake Louise for a few months.
at November 11, 2016 1 comment:

The Last Days of the Republic - On Route 58

A strange thought occurred to me over the weekend. What if these are the last days of the Republic and we are about to be swallowed up by the orange peril in less than two days?

Stranger things have happened. Germany's Weimar Republic, a creaking democratic institution died in 1933 as Adolf Hitler, who became part of the government after winning 37 percent of the vote a year earlier, seized power.

In 1921 in Italy the fascist party of In 1921, the Fascist Party of Benito Mussolini was invited to join the coalition government. 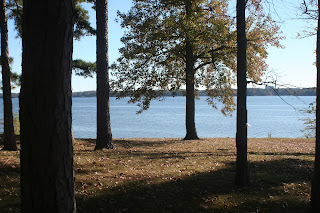 These two frightening despots did not come to power through a revolution. They used the tools of democracy and turned them on their heads. There's no doubt hate is on the rise. You don't need to go much further than the nearest Twitter feed to find it.

It's also clear that this election is a lot more stressful than those that went before it. I have heard reports of people with PTSD and other forms of stresses. On what I hoped wouldn't be the last weekend of the republic, I decided to take a road trip west.

I was heading for Hanging Rock and Pilot Mountain in North Carolina. I wanted to clear my head on the high ledges and catch the foliage. The fact the campgrounds were full made me wonder about how much isolation I would find.

I headed out on Route 58 which may be Virginia's answer to Route 66, although a lot more dull.

The highlights of Route 58 include the paper mill in Franklin that was meant to have closed a few years ago but still belches out foul-smelling fumes.

There are a few broken down garages, schools in Southampton County that look like jails and there's a big RiteAid somewhere on the route.

After driving for about an hour-and-a-half I got to Emporia where a bewildering array of fast-food restaurants with huge neon signs on large poles rises out of the fields. Emporia is known for its high rate of thefts and the poisonous fried food in Appleby's, a place that touts itself as family-friendly, but probably contributes to the high divorce rates in these parts.

South Hill and South Boston are like mini Emporias, although there are some not unpleasant old streets if you ever escape strip malls of Route 58.


With about an hour-and-three-quarters to the wilderness, I was starting to wonder if my car would make it. The rattling of the wheel was getting worse. I had visions of breaking down and coming to grief. Watching Deliverance for the first time recently had not helped. 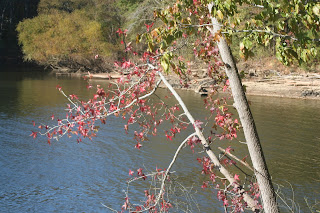 
Then it happened. I reached for my lukewarm McDonalds coffee and the car moved to the gravel by the side of the road. There was a terrible noise and suddenly the car was rocking all over the road. I eventually stopped to find the rear tire was shredded.


At times like this, I was thankful for my AAA membership. There was a spare in the trunk but there was far too much debris above it to move it and the last time I tried to jack up a car, it almost fell on my head. It was probably just as well. When the tow truck guy showed up he informed me the tire workshop AAA had routed me to would not have my kind of tire until the day after Christmas. He found a place in Danville that was open for another hour.

Shortly after getting into the tow truck, I realized my iPhone had vanished and is probably still on a grassy verge near South Boston.

The reality of my predicament dawned on me as the tow truck guy drove away and the waxy man behind the counter glared at me and pointed out they usually don't help people half an hour before closing.

He took my key and went off muttering, I saw my car being jacked up an hour later.

When I finally got back behind the wheel, I was relieved to find the car actually moved. I thought about continuing to the state park but suddenly felt a curious sense of emptiness without my phone. How was I going to find a remote state park without Siri? I stopped at a couple of gas stations and asked about maps. They looked at me like I have inquired if they stocked rocks from Mars.

I thought about seeing more of Danville but a recent survey listed it as the worst place in Virginia and the glum demeanors of the people in the tire shop had convinced me. Finally, I wound my way back to Route 58. The return journey served to remind me how long roads feel when you have no real destination. On the road to Halifax, I was struck by how every other house had a Trump sign outside it.

The feeling of anxiety was growing. I was spending the last weekend of the republic on a back road to nowhere.

The only highlight of the trip back was finding the understated but pretty Occoneechee State Park, a sanctuary with no Trump signs as far as I could see, a place where understated people went to wander around and generally lose themselves.