The Confederate flag has always struck me as distasteful. I feel something unpleasant in my gut when I see it. It makes me think of rednecks swilling Miller Lite, arm less shirts and those old re-runs of the Dukes of Hazzard. The feeling I get isn't as strong as if I see a Swastika but it's along those lines.

Now in the wake of the terrible Charleston church killings in which a white youth who took pictures of himself with a gun and the flag, killed nine black worshipers, politicians have been racing to distance themselves from the Confederate flag. The Republican party has been in the vanguard with Mitt Romney leading the way. In the past some Republicans have defended the right to fly this flag which is odd really when you consider Abraham Lincoln was a Republican. 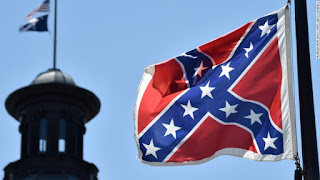 
I'm not sure this flag should have any place in the American psyche but the fact it does says much about the American psyche. There have also been reports this week of a large upsurge in demand for products with the Confederate flag on, perhaps in anticipation of a ban.

Locally people have been going even further and calling for the removal of Confederate war memorials from the Civil War which frankly I think is stupid because these soldiers died in large numbers, admittedly fighting for a disturbing cause. The Confederate flag flying in official places is a different matter entirely.

Here are five little known facts about the Confederate flag.

2 - The Confederate battle flag came into widespread use during anti desegregation protests in the mid 20th century. It's modern use is closely mired in racism. It was adopted by South Carolina politician Strom Thurmond who ran for president on a segregation ticket.

3 - Mississippi, which has a good claim to be the most backward and depressing state in the US, is the only state to feature the battle flag in its state flag.

4 - The battle flag was also called the Southern Cross.

5 - General Robert E. Lee, who led the Army of Northern Virginia, was closely associated with the flag but he rejected the symbols of the Civil War after his defeat and no flags flew at his funeral.

Sharks are attacking kids off the beach, there's screaming and panic in the water and the Mayor said there wasn't time to get people out of the water. It sounds like a certain movie but alarmingly this was what really happened over the weekend at Oak Island in North Carolina.

The wounds from these shark attacks were no mere graze. In both case kids lost arms on a beach where a girl had suffered less serious shark injuries a week earlier.

Just a day earlier I had been at North Carolina Aquarium showing the kids the famous shark tank. Of course shark attacks are rare, I told them. The sharks drifted graceful and silver in the tank, never showing any sign of turning vicious and attacking the large fish they shared a tank with. Still, there was something disconcerting about their button eyes. It would be cliched to say there was not a spark of humanity in them because sharks are, afterall, fish. You would, expect them to be cold fish. Nevertheless, their eyes are rather chilling.

I've never been to Oak Island but I've been down to Wilmington. It gets so humid on the North Carolina coast that it's unbearable not to go into the water. However, the victims in these attacks were only up to their waists in water.

George Burgess, the director of Florida's Program for Shark Research at the University of Florida's Museum of Natural History, said blacktip and spinner sharks frequent this coast and can get up to seven feet long. He said they only tend to bite people in "mistaken identity" situations when they think splashing arms and legs are normal prey.

Mistaken identity or not, it's harrowing to lose a limb and these sharks seem rather focused.

Oak Island Mayor Better Wallace said it all happened so fast there was little time to get people out of the water.

Although there are clearly echoes of Jaws Mayor Wallace has a long way to go to become Mayor Vaughn who said: "It's all psychological. You yell barracuda, everybody says, "Huh? What?" You yell shark, we've got a panic on our hands on the Fourth of July."

Most reporters have been saddled with covering car accidents at some time or another and it's not always easy to find people who can talk about what happened. News editors, naturally seemed to live in a parallel universe and to believe that every accident scene is populated by an army of people who are waiting there to give their account to the media.

Of course TV reporters have the upper hand in this regard. There are people who are dying to get on their local TV station no matter how hokey it is. In my days as a reporter I spent more time than I can remember, trying to find eye witnesses who would give lively quotes. In saying that there was always the danger of finding a witnesses who would give too many quotes and hog the limelight. I thought about this when I saw the video footage of "twisted round like a tornado girl,"

My first reaction to this clip was to ask what she was on.

My second was who goes to Burger King to get a "piece of burger."

My thought thought was just another confirmation of why I never want to visit Mississippi.


This video is like looking at a second car wreck. "This attention whore looks like a horse on cocaine," stated one unkind commentator. Sort of true, though, even if the polite term is flamboyant witness...

The woman in question is apparently variously called Ruby Evans or Courtney Barnes. She has been on some kind of reality TV show and a parody song is on its way. I have no idea why I have wasted five minutes writing about this person or why anyone else should.

Fixated by Naked and Afraid

I haven't watched much tele but of late I have become fixated by Discovery's Naked and Afraid. It's the show where total strangers get their kits off and try to survive in a jungle or another godforsaken wilderness for 21 days.

My fixation isn't due to prurience. Believe me - after a couple of days in the jungle, naked and sweaty bodies have little allure and the show blurs out naughty parts anyhow. 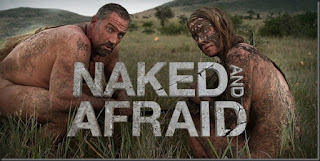 I'm more interested in what this show reveals about the human psychology because it can be a bit like The Lord of the Flies on reality TV. The show starts with two strangers - a man and a woman - who are flown to a remote places such as Borneo, Colombia, Brazil etc. and then told to strip in front of each other.

The contestants usually have some kind of survivalist background. Typically, they treat the first day like some kind of nudist vacation, skipping through the jungle or sand dunes and musing on the beauty of the wilderness. Then the reality that they have no shelter or water will occur to them a couple of hours later.

It's at this stage that the things we take for granted such as supermarkets and air conditioning kick in. Watch a few episodes of Naked and Afraid and you will never complain about the 300 pound man or woman in front of you at the Wal-Mart check out who is meticulously describing each item he has bought to the cashier.

Although building a house from palm trees on a desert island may seem romantic, the contestants soon find they dehydrate quickly in temperatures of 100 degrees and finding water is no easy job. Drink from a stream and you could catch some terrible tropical disease. You need fire and methods of purifying water but contestants have spent five days on this show trying to start a fire. The happiness of the contestants when they get a sip of water is worth savoring but a couple of days later hunger sets in and you realize killing animals in the wild or eating safe plants is no mean feat.

On one challenge the contestants find coconuts only to discover rats had eaten them and they were crawling with lice. The male contestant set up traps and manage to kill multiple rats which the woman would not eat, prompting the man to become increasingly crazy and to describe his pleasure at devouring their ratty entrails. This particular contestant had no girlfriend at the start of the episode and it unlikely to now either.

That's another interesting thing about Naked and Afraid. We start to see how people behave when they are deprived of water and food and it's not pretty. In one show the most chilled of guys who prided himself on his skills as a life coach started bitching out his partner who spent 20 out of 21 days whining.

Naked and Afraid also raises questions about traditional gender roles, especially when we see the men trying to hunt and the women doing domestic tasks such as cooking and repairing the home. Is this nature or nurture? Did humans fall into these traditional roles for a biological reason based on strength or has society conditioned us to take them up.

Whiny women is something of a theme but that's not to say this plays out with all couples. In one episode an overweight guy spent 21 days sitting on his backside in the palm hut while the woman risked heat stroke, attempting to find food. The woman was taken off the show, suffering from extreme dehydration and the man completed the challenge. Maybe we can try too hard when we can sometimes achieve results by sitting on our backsides.

The deterioration of couples in Naked and Afraid gives a frightening glimpse into why the settlers in Jamestown turned to cannibalism and why there are more wars in Third World countries. Let's not forget this is only a 21 day challenge and there's always the fall back of dropping out and going home. It's frightening to imagine Naked and Afraid as reality but it's exactly what our predecessors faced.

There are also some heart warming episodes among the poisonous snakes and rats such as the episode in which a pig headed chauvinistic former Marine who was holed up with a vegetarian woman finally learned about mutual respect in the jungle. The scene where she brings him a dead toad to snack on when his machismo had washed away, bordered on the moving.

The other thing I wonder about this show is if anyone had sex. It's hard to imagine when you are malnourished and you stink and tics are eating your eyelids but I have to wonder. They are naked afterall. There are certainly scenes in cold places where sharing body warmth makes total sense. If anyone is doing the extremely dirty out in the jungle, nobody is showing it on TV, which I am really fine with.
at June 08, 2015 4 comments: