A to Z Theme Reveal - A Novel Theme

Seriously I did some sort of bloghop A-Z theme reveal a couple of years ago but I am a bit out of touch with all of the blogishphere these days.

Still I have seen a few posts about the A-Z theme reveal and I thought it was high time to post as I have no theme to reveal really after doing music and animals in the past. This year's is far more exciting and ambitious. I will be writing a mini novel with one chapter every day. In many ways this is a lot more difficult than a theme and, although, I have done some forward planning I still feel the cold chill of A approaching me fast on April Fool's Day. It's less a clarion call to action that the mocking bells on the toe of a court jester but, nevertheless, it's coming at me fast.

My novel is about a troubled young man called Campbell who finds himself alone and adrift in the heart of Europe. It's about what he does next and his troubled relationship with his cousin Monty who is successful in everything he does - and knows it. In short, the type of cousin we love to hate. In order to find out if he gets one over his coz, you will have to read the whole thing, Come to think of it, I will have to write the while thing - not to mention thinking of a title. I have such trouble with titles.

Stopping By Woods on a Snowy Evening

Recently I had a passing conversation about poetry with someone. Of course, it was on text. Aren't all conversations these days? 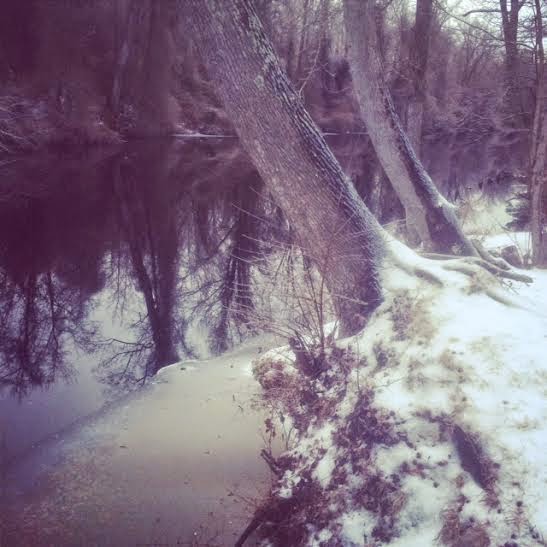 
My notion that poetry is for everyday life may be as unfashionable as poetry itself but I stand by it. Poetry takes its rhythms from life and can enrich it. I say this even though I had little interested in getting my daughter, who is a voracious reader, to read The Stolen Child by William Butler Yeates. it's hard to convince a 10-year-old that the poets of yesteryear make the One Directions of today look like they are going the wrong way down a one way street.

During the recent snowfalls I stopped by the Dismal Swamp Canal just over the North Carolina border to take in the solitary, glittering world of the dark water as evening approached. It made by think of a poem by Robert Frost who once arrived at this forbidding wilderness to end his own life. However, something about the silent swamp made him change his mind.

Stopping By Woods on a Snowy Evening by Robert Frost

Whose woods these are I think I know.
His house is in the village though;
He will not see me stopping here
To watch his woods fill up with snow.
My little horse must think it queer
To stop without a farmhouse near
Between the woods and frozen lake
The darkest evening of the year.
He gives his harness bells a shake
To ask if there is some mistake.
The only other sound’s the sweep
Of easy wind and downy flake.
The woods are lovely, dark and deep,
But I have promises to keep,
And miles to go before I sleep,
And miles to go before I sleep.