Anyone remember the days when air travel used to be glamorous? Ok I don't recall it being quite like this but it was certainly different to how it is now. 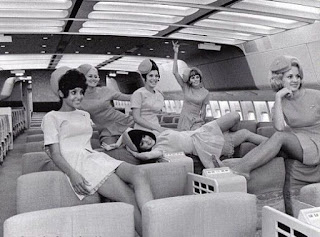 I have memories of a flight to Canada back in the day when the air hostesses plied me with free beer on demand - and that was in cattle class. Today you have to pay through the nose for a can of Coors Lite and the stewardesses look at you like you need intervention  if you even ask for alcohol. Increasingly,I don't even bother and just make do with their ice water and micro packets of peanuts.

On Friday night I was flying out to Colorado on Delta. I haven't heard many good things about Delta other than the fact you may be marginally less likely to spend the night on an airport bench than if you are flying with American. Last time I flew on Delta, I did indeed spend an unscheduled night in Atlanta. The airline didn't pay for the hotel, but it stumped up for a tooth brush and wash cloth.

On Friday when I showed up at Norfolk for my flight, I was somewhat alarmed to see it was an hour late. This would not have been a problem if Norfolk was not one of those airports which flies to about three destinations so, invariably you have to connect. There was an hour between my connection to Denver at La Guardia which is up north somewhere.

I did the clueless thing for a while, going through security anyhow and buying an overpriced coffee until my significant other who was already in Denver - miraculously via an American flight that had not ben diverted to Puerto Rico - suggested I might want to retreat from the deserted check-in desk and talk to someone at Delta.

Inevitably, my flight from La Guardia had been the last and the woman suggested I could hang out in Atlanta all night testing just how comfy the benches were or get a flight out to Atlanta at 5.44 a.m. I opted for the later and went home for a skinny sleep.

The next day I amazed myself by getting on a flight that wasn't delayed and getting to Denver. I decided to mix up the flying fun by opting for peanuts and water on one flight and Fig Newtons and water on the second flight. On one flight I was close enough to first class to see real food and to sneak a peak of their movies. I avoided check in luggage because it costs about $20 per item and the chances of making connections would be negligible.

The glamor days of flying may be long gone but I reflected on the fact that at least there was little prospect of the passenger next to be spilling food or orange juice on me. At one time I was on a roll and would seldom arrive at a destination without a smattering or orange juice or red wine on my pants.

My Delta experience on Friday made me increasingly nervous about the return flight which involved a window of about 50 minutes to get the last flight to Norfolk out of Detroit. I figured of all of the places to test out the benches, Detroit was probably the worst. My angst increased when the flight out of Denver was posted as 20 minutes late. I spoke to the Delta guy on the gate who said it was no big deal because the pilot would make up the difference because of a tail wind and the flight should get in by 9.05 p.m. for my 9.45 flight.

The flight got in just before 9.20 and I was not alone in having about 20 minutes to make a connection. The aircrew advised people for whom Detriot was their final destination to allow us changers to get off first. Either there were a lot of changers or nobody wanted to admit living in Detroit. In the carnage that ensued, old women partially crushed babies in the rush to get off. I was ahead of the game, fuelled as I was by a bag that contained three salty peanuts. I deftly ducked in front of a man who had 15 minutes to make a flight to DC and made a dash for freedom. I checked the information board and was alarmed to see my flight left from Concourse C and I was in Concourse A.

Getting to Concourse A involved riding a train, about five escalators and a a walkway that appeared to connect Chicago to Detroit. The escalator had been deliberately packed with the most immobile people in Detriot. Still, at the back of my mind was the full horror of hanging out here all night. I ducked and dived and ran. By the time I reached the gate I was sweating profusely and had expended all of my peanut energy. I had made it about 10 minutes before the gate closed. I even found the boarding pass on my smartphone and the battery hadn't quite run down.

For a while I sat in my seat and blissfully thought about how I would dine in style before reaching Norfolk at midnight. It would be pretzels this time...