A sad end to the freak show

There's nothing like a celebrity death to bring out the worst in journalists.
And there are few celebrities bigger than Michael Jackson.
So when news of Jackson's death started to filter through, the usual newsroom antics weren't far behind.
Bets were discussed on whether Patrick Swayze would also die on Thursday making it a trio of Farrah Fawcett, Jacko and Swayze in one day.
There was consternation that Jacko's white gloved supporters would be out moonwalking en masse on the streets, or that there would be a tsunami of wailing in Japan.
The usual puns on Jackson's songs were soon up on Facebook - Beat it, Killer, 20 percent off the Jackson Five etc, while one writer was taking odds on Madonna also shuffling off her mortal coil.
It didn't take long for the first Jacko jokes to follow.
There was so much tweeting on Twitter it apparently ground to a halt.
Nobody seemed to be sad about Jacko's death, except perhaps greedy plastic surgeons and a man famous for bending spoons.
I'd like to say I didn't join in and was above it all but, you know how it goes.
But now that it's all over Jacko's death has left a queazy feeling in the pit of my stomach because it casts an unpleasant hue on our sickly celebrity-obsessed society.
Long before his untimely death Jackson had ceased to become the kind of celebrity anyone aspired to be.
He wasn't like Marilyn Monroe or James Dean who were still uber cool when they died. He was a grotesque corruption of one of the most talented artists of the 20th century. He didn't seem to be black or white; male or female, man or boy. In his later years he appeared to have dropped in from Mars.
Nobody who shed a tear to the melodies of Ben at a school disco could ever equate the prodigious talent that was the teenage Jackson with the porcelain freak show who slept in an oxygen cylinder and dangled a baby from a hotel window.
But surely it's an indictment on us all that instead of caring about putting together the tortured pieces, we bought the popcorn and sat down hungrily waiting for the the final chapter of the macabre show to unfold like the crowds who came to see the hangings at Tyburn.
Martin Bashir's famous interviews brought home to us how disturbed and out of touch with reality Jackson really was.
But they also shed light on something else; the sinister nature of Jackson's relationship with his father Joe who thought little of beating, intimidating and bullying his kids towards perfection, sacrificing Michael's childhood for fame and fortune.
By the time Michael Jackson brought out the album Thriller in the 1980s, the perfection blueprint seemed to have worked. Jackson could sing, dance and perform like no other artist in the short history of pop.
Pity it was exactly what dad ordered; an act.
And when the cracks began to show they weren't just in the face Jackson tried to create to look less like his father.
They were to split a brittle human being into a million pieces, all of them hurtling groundwards toward a gaudy Neverland where child abusers stalked the Carousels.
Not that anyone cared. The intervention strategies we see every day on reality TV don't seem to apply to the famous. We watched appalled as Jacko's kids were paraded round with their faces covered. And nobody did a thing about it.
The Jackson tragedy should be a lesson to all of us who push and punish our kids into being the superstars we never were.
It should bring it home to us that being ordinary is nothing to be ashamed of and everything to aspire to.
at June 25, 2009 No comments:

trapped in the past 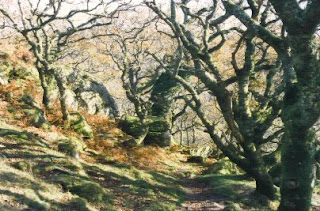 It's been a June of bouts of unremitting heat and leaden skies split apart by thunder here in Virginia.

During such months you have to wonder about those madcap adventurers who made the trip across the Atlantic more than 400 years ago to simmer in a mosquito-infested swamp at Jamestown and to freeze and starve in between unedifying episodes of cannibalism.

To me the New World remains a bewildering and unforgiving place at times. Away from the cities the trees seem taller and more savage than in Europe, the brackish waterways darker, more mirky and muddled. I feel if I look over my shoulder I will glimpse heavily tattooed people flitting through the half light of the forest and spirit demons exorcised with their drums.

Where man has left his mark the cities of Virginia can also be unforgiving on the eye, sliced up by hulking, concrete freeways that divide rich from poor and strip malls that are vast Saharas of cracked concrete and testaments to prosperity lost.

Faced with the slabs of downtown Newport News and the sickly, sulphorous residue of the coal dumps at the shipyard that linger in the nostrils for half a mile up the Interstate, it can be easy to lose hope like the souls in the ghetto to the east, who live and die prematurely on the wrong side of the tracks.

Sorrow lingers down here in the streets with numbers but no names. My landmarks are the half remembered scenes in the half light where the only color is the yellow of incident scene tape and the blue lights piercing the gloom. I measure the distance of the blocks by the footfalls of the marchers who come to remember the prematurely dead.

The candles and makeshift photographs taped to cardboard are a world away from the solid war memorials that occupy pride of place in every English town but they share a common heritage that seeped into the bloody ground.

Many a time on a homicidal intersection I have yearned for a peaceful stream and an English meadow. Grantchester with its sleepy homes and bunched willows draped over the flowers of the water meadow, seldom seemed so alluring. The Old Vicarage where Rupert Brooke wrote of the lilacs in bloom, never so unattainable.

Brooke, the flowering of English youth, died on a Greek Island, in some corner of a foreign field that is forever England, on the way to one of the bloodiest theaters of World War I.

The longer I am away the more easily I slip into the Arcadian/American view of England as a place of antique steam trains, Shakespearean theaters, old maids riding through the mist and sleepy afternoons caressed by the sound of leather on willow.

It becomes more convenient by the day to airbrush from my mind the ugly asphalt of the A12 and the tower blocks of Barking, of walking the gum strewn gauntlet to Blockbuster past the crack addicts and hustlers and the schools of the East End with their grubby walls and high steel fences.

But for an island so densely populated England is yet to give up its gentle charm and the countryside is seldom further than an hour away.

On the days when the storms muscle their way up the James River, sucking the oxygen from the sky, I am increasingly far away recalling the gentle contours of Wenlock Edge and the clouds that rise like pleasure balloons over the escarpments on a Sunday afternoon.

It's becoming increasingly hard to forget about those blue remembered hills.
at June 09, 2009 No comments: