How We Loved and Lost the Wilderness

When we were kids, our vacations were far from exotic. In Britain, vacations are called holidays. They are often endured under squally skies. It wasn’t until I saw one of the many American TV shows that flooded our television screens, Dallas or Knotts Landing that I first heard the word ‘vacation.’ At the time, it seemed very exotic like the kind of things Americans did.

Our visions of America were hazy and colored by movies, cop shows and the man next door, the mysterious ‘man in America’ who was often away across the Atlantic making large amounts of money.

When I pictured the word ‘vacation’ I visualized oversized hotels on Miami Beach, row after row of chandelier adorned opulence embraced by palm trees.

Our holidays were less glamorous. We went to cottages and when the budget was particularly tight to caravans which are like small portable trailer homes.

One week in July, our home was a metal contraption in the middle of a bleak field in North Cornwall. It may have seemed unprepossessing but we made the most of it. I would hike across the field to the woods with my sister and go on long expeditions. We found a large barrel up against a hedgerow, affording impressive views onto the rolling fields. 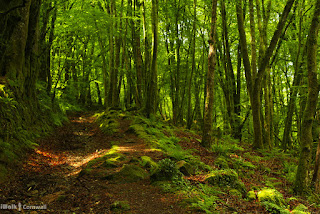 The woods of North Cornwall

In the days that followed, we kept going back. We adorned it with soft furnishings and nailed wooden slats over the opening to make it a forest home. The project took on a life of its own. I’m not sure to this day why the project gave us such satisfaction. Maybe at the age of 10 or thereabouts, we had reached a perfect symmetry of happiness.

From the home in the woods, we would watch the sun fall over a hay wagon and the last colors of the day being breathed into the clouds before they were gone. It was the nearest thing to the frontier and the American prairie that was ironed into my consciousness from an early age by Yogi bear and books featuring steam trains heading over the Rockies.

Although this was the only time we built a forest house I recall another time about two years later. It was a blustery day but I rode my bike far to the western reaches of Gloucester. I found a copse of trees and started gathering up branches. I built a teepee-like structure. There was a desperation in my movements. No matter how many branches I assembled and how much foliage I found, the structure remained skeletal and exposed to the unremittingly gray sky.

The bleakness of the looming teen years washed over me and I walked away. Later I wondered what fueled my frenzied gathering of sticks. Was it a desire to go back to those half-remembered sunsets of North Cornwall? To a world half-forgotten.

I was reminded of these two house-building projects when I started reading Last Child In The Woods by Richard Louv.
The books is about the death of outdoor adventures and the way children have retreated behind their electronic devices. I can relate as I am constantly trying to drag my kids off their devices and into the great outdoors with various degrees of success.

Louv recalls reading Shelters, Shacks and Shanties as a child. The book was written in 1915 by Daniel C Beard. He describes how children can build up to 40 different dwellings in the wilderness and the woods. To Louv, the books conjured up images of underground forts in cornfields and other delights in nature before The Lovely Bones tainted such places with horrors like kidnapping and murder.

Louv mourned the lost frontier that his generation and ours experienced in nature. “In the space of a century, the American experience of nature – culturally influential across the world – has gone from direct utilitarianism to romantic attachment to electronic detachment,” he concluded.
I can only concur. It fills me with sadness that the only structure my kids are likely to build in the woods is on Minecraft.