At Fairy Stone Park - Alone By the Lake

It has been a long time since I last wrote a blog post. As the time between posts stretches out, it gets harder and harder to get back on track. You get to the point when you almost forget you have a blog.

Of course, there's no better day than April 1 to write a new post. You can fool yourself you've never been away. It's also the first day of the A-Z challenge. It's odd to think that just a year ago I could blog every day for 26 days. A year, later I feel I'd be lucky to write one post a month. Suddenly, I know how it must feel to be old and decrepit and to look through the thick glass and see kids riding their bicycles and to think 'one day many moons ago I could do that." 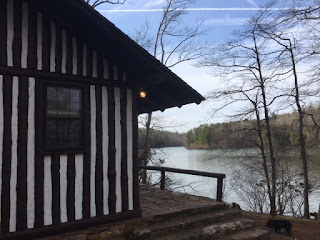 The comparison isn;t accurate. I could do it if I want to. It just seems a year later that I have too many things going on. There's too much stimulation and the brain flits around.

Sometimes when I'm out in nature with the kids and we're on our mobile devices I wonder how it came to this. The beauty around us is lost. A bull elephant could break out of the bushes and charge toward us and we would not notice. 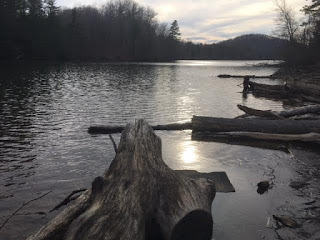 Perhaps we don't realize who we've become until it's taken away. Last weekend I went to Fairy Stone State Park with my beloved. We stayed in one of the original cabins build during the New Deal which is becoming rather an old deal now. Our cabin was the only one with brightly striped vertical beams. The others had horizontal beams which led me to conclude they built ours first, an angry foreman showed up and yelled at the workers for putting the beams the wrong way, and they built the others properly. 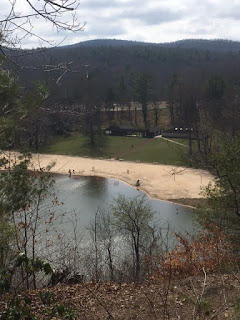 The state park cabins are somewhat utilitarian. The furniture is not really made for sitting on, the kitchens are small and there's no TV or Internet connection. I'm not sure at what point the enormity of this set in; probably when I tried to go on Facebook two seconds after arriving.

Slowly it dawned on us that we were cut off from the outside world. We were alone by the lake with the high wooded hills. The White House could burn down and Russia could invade and we wouldn't know about it, although that seems to have happened anyway.

On the first day, we walked down the lakeside path to the dam. There was a verdant tranquility down by the edge of the lake punctuated only by the voices of thousands of frogs. 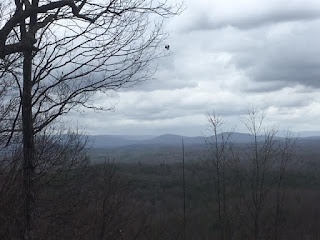 Later that night I watched the waters of the lake turn silver as the darkness crept over the hills. We took a walk later and gasped at the size of the stars and the brightness of the shimmering canopy over the trees. 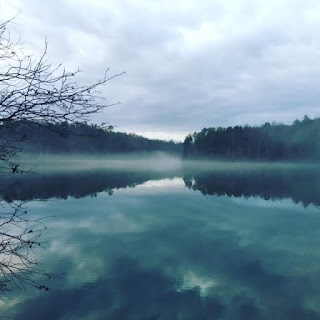 The next day we hit the trail up the hills to a view over the Appalachians and a small waterfall in a glade. Back in the cabin, we leafed through the comments book. I'm used to such books in Britain that describe a lovely stay and make passing reference to the weather. At Fairy Stone, I was amazed at how many people spilled out their innards in the volumes, detailing dead relatives, fights against cancer, the loss of pets and how the mountains restored their faith in God. One entry described how a couple had been to our cabin on their honeymoon and returned on their anniversary 20 years later.. The account made me uneasy and I had to double check the bed sheets. 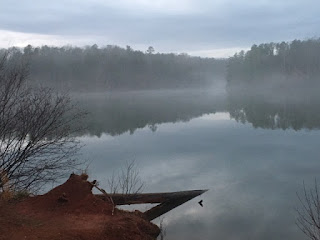 That afternoon the rain set in and we read for most of the afternoon, drank beer and prepared food. I didn't miss the relentless buzz of news feeds and emails, the likes on pictures, the texts and constant affronts to my sensibilities of Trumpism. A few hours later the lake was bathed in an evening mist. I walked the shore, breathed the air heavy with the fungus tipped aroma of mud and rain. It was a Sunday and all the other cottages were empty. The vastness settled on me. 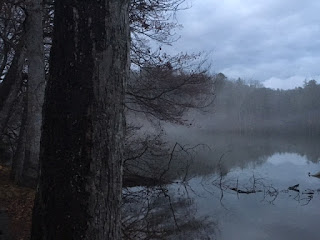 We were alone by the lake. We were adrift in the shallows. I found myself liking the feeling. 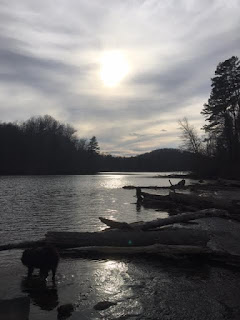