Up On the Blue Ridge of Virginia

For weeks the idea of losing myself in the wilderness had become more and more appealing. I'd disappear for a weekend of solitude away on the Blue Ridge. I'd set up camp and wake to the sweeping vistas, birdsong and meadows of wild flowers. 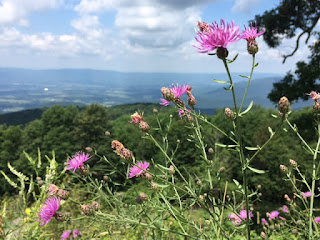 Of course, when you tell people you are going camping alone, you get strange looks. Folks inform you, you will almost certainly fall off the trail and your body will never be found. If you survive the fall you will get eaten by bears. Or you will sustain a deadly snake bite in a place where nobody can hear you scream. 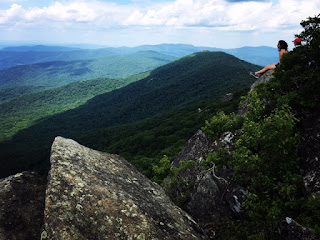 Even if these fanciful notions don't come to pass, people will tell you lone camping is plain weird. Kids will see you emerging from your tent and tug at their parents' shirts to warn them of the weirdo who has just emerged to steal their Lego. 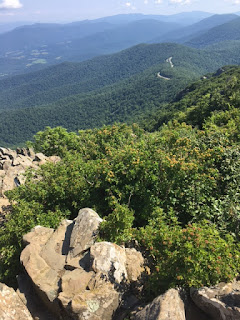 Anyhow, I defined the naysayers and headed off alone to the Shenandoah National Park, home of numerous bird species and the elusive black bear.

The plan was to get to Big Meadows camp ground by 12 to bag a camping spot. In the event, I became embroiled in a circular argument with Siri in Charlottesville and arrived an hour late. In the age of modern communications, you clearly don't need a partner to have a navigational argument.

By the time I drove to the camp ground there was a sign up saying it was full and a trail of scruffy Australian tourists waiting for the next spot to become available at midnight. 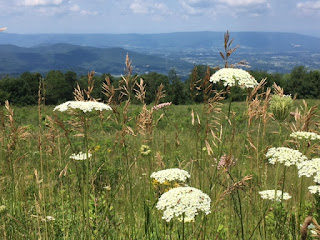 I thought 'screw it' and hit the trail. At the Pinnacles Picnic Ground, I loaded up with Cliff bars and water and hit the alluring Appalachian Trail. There are few things more fulfilling than starting off on an open trail with sweeping views east and west on a clear blue day when most of the summer heat has been left behind in Tidewater. 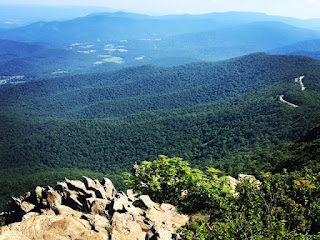 The first person I met was a girl in her 20s who had been walking the trail for months alone from Georgia. This put all those warnings about the dangers of one night in the wilderness into perspective.

However, for much of the day, I was alone with my thoughts. The blue ridge was as blue as ever and the views from Mary's Rock were dazzling in all directions. Even the slog back to the parking lot which was a much more consistent climb than I remembered put me in a pleasant late afternoon haze. 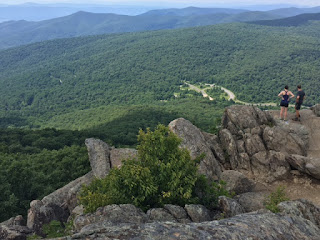 I found a motel in the Shenandoah Valley, an unthreatening place of floral bed spread and bear prints that might have been designed by one's Scottish aunt.

I drove through some of those places we had visited on family holidays years ago. When I saw the signs for the caves, I had fleeting thoughts that the kids might like it here. But all in all, I felt placid and wonderfully lost in the sweep of the mountains.

I went back for more the next day.