Blue Skies Over The White Cliffs of Dover

Don't let anyone ever tell you the skies of England are never blue or the sun is always obscured by clouds. Don't let anyone tell you the famous white cliffs of Dover are really not white but a shade of gray, that the symbolism of the past has been buried in the present.

On the day we returned to the white cliffs the sky was a deep azure and the chalk cliffs gleamed in the afternoon sun. The downland shimmered and rolled down to the magnificent bastions. Dover Castle was the solid presence it has been for the past 10 centuries. 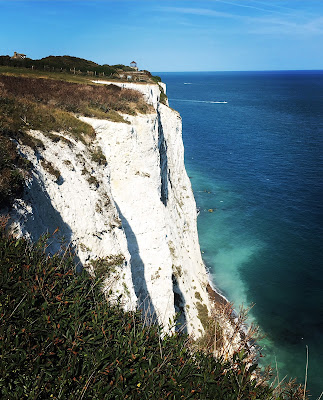 Much has been written and sung about this place. Famously Dame Vera Lynn sang.


There'll be bluebirds over
The white cliffs of Dover
Tomorrow
Just you wait and see
I'll never forget the people I met
Braving those angry skies
I remember well as the shadows fell
The light of hope in their eyes
The song is old and it stirs memories of another era when the white cliffs meant more than pleasant walks to the South Foreland Lighthouse. The white cliffs meant bravery against the odds. They were the very last bastion against the waves of darkness.

August 2017 was three-quarters of a century removed from August 1940. The skies high above the white cliffs were empty from here to the hazy outline of France but for the white and wispy clouds.

Yet back in 1940 they echoed to the low roar of bombers. Wave after wave of Heinkels and Dorniers hummed overhead like heavy black birds shackled with swastikas and bombs. It's no exaggeration to say the future of the world depended on those chaotic August days above the white cliffs of Dover. The Nazi threat may be consigned to the history books but it lives on in popular culture be it the Nazgûl from Tolkien's Middle Earth George Lucas' Death Star. 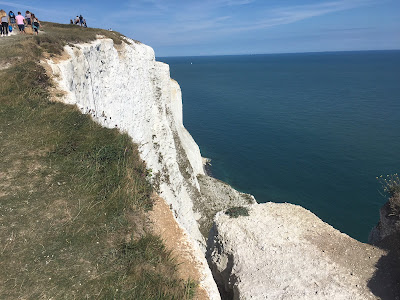 I'm not naive enough to believe in good guys and bad guys even though I would pester my parents during every movie when I grew up; who are the good guys who are the baddies? Are the cowboys good and the Indians bad?

Yet during the summer of 1940, there was no disputing who the real heroes were. Day after day the sleep-deprived British pilots scrambled in their tiny fighters to the skies to tackle their vastly superior foe. Airfields such as Biggin Hill were bombed over and over. The ground crews would work round the clock to patch up the runways and the Spitfires and Hurricanes would return to the skies. These men in their rickety flying machines were the last defense against the unthinkable.

The RAF pilots suffered terrible deaths in their tiny planes and manpower ran short. The toll inflicted on the enemy was even greater. In the end, the Luftwaffe lost heart and turned to the easier targets of bombing Britain's cities at night. The thin line held and the white cliffs were never breached. Adolf Hitler turned his murderous intent to the icy wastes of Russia where his armies would meet a terrible end. 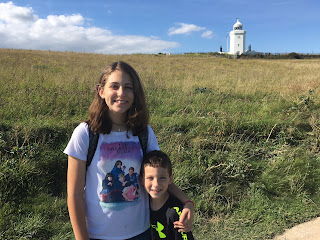 The pilots of the RAF had stopped the darkness from spreading and often paid the ultimate price.

The words of Winston Churchill traveling back through time sound more like a movie than the kind of thing we would expect from a contemporary politician.

"Never in the field of human conflict was so much owed by so many to so few."

Today those who lived through Britain's darkest hour are dwindling. The fighter planes have long since gone from the skies over the white cliffs. Hitler's invasion fleet that never went to sea is a footnote in history. We won our freedom and the specter of hate has been vanquished.

Yet around the time of our walk about the cliffs, I was disturbed to scroll through my phone and read the news from my home state of Virginia. Charlottesville, where I had been just months earlier at a climate change march. Now it echoed to the sounds of riots. In the streets, young men attacked protestors dressed in the hideous helmets and garbs of the Third Reich. Thickset men with bull necks sported swastika tattoos on their arms. The menace that had lurked so many years ago on the hazy outline of France was reborn. Or perhaps it had never gone away.

Today racism is again on the march and the sickening pall of the furnaces that burned the flesh of the many is belittled and discounted.

I didn't see any bluebirds over the white cliffs of Dover and the blue skies were empty of bombers. I found myself wondering for how long.