What Color is the Accursed Dress?

There are many great mysteries in the history of the world. How did the stones get to Stonehenge? What happened to the Amber Room? What happened to Lord Lucan? What is the riddle and the meaning of the Spinx? Who was Jack the Ripper?

You can add to that what color is this dress after a user posted a picture on Tumblr of a dress worn by the mother of a bride at a Scottish wedding because she was confused about the color of the dress. 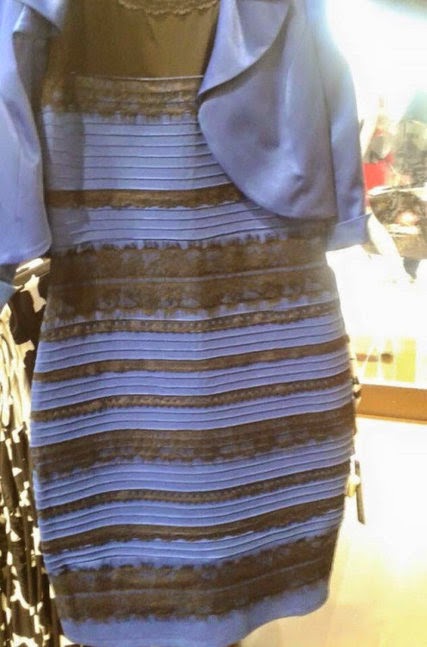 The result was in Internet meltdown and the most famous blue dress since the one worn by Monica Lewinski. By Friday 28 million people had seen the dress. Chances are you have seen this already. Unless you have been living under a rock. The dress has even drawn in psychologists who have asked weighty questions such as if you see it as darker are you prone to depression.

I can't say I was dragged kicking and screaming into the movie theater to see Fifty Shades of Grey on Valentine's Day but nor was I oozing enthusiasm - not that oozing anything is ever particularly pleasant.

Exactly one hour and five minutes into the movie it was going all fuzzy and indistinct. About five minutes later G nudged me to say I was snoring and the woman next to her was funding it funny. I said I was rather glad she was able to get a laugh out of the movie because generally speaking it was uninspiring stuff, although it left me wondering about new uses for my Kohls ties. 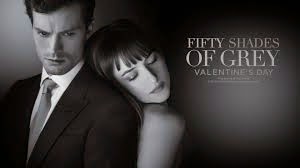 At least I went into the theater forewarned by reading reviews - all of them which said the movie was dire. I actually emerged into the chilly sunshine remarking that the movie was not as bad as I had imagined it would be. Even so it was up there with the average kind of fare you watch on Lifetime TV and made me want to go and find somewhere to watch Birdman or Boyhood.

For anyone who has been living under a rock for the last few years Fifty Shades of Grey is a series of novels written by the English author E.L James about two people who do various things with nipple clamps, toilet brushes and drain cleaner - I may be a bit off about that as I haven't read a single page - but you get the drift.

Sebastian Grey is one of those creepy sleazeballs who takes his first dates on a helicopter ride and gives them new Audis as love presents. To be honest I'd be fine with the Audi love present thing but guess I just need to be content with a used coffee table.

The coffee table comparison is quite apt because the Grey actor perfects the art of wooden in this film, although I had a bit more time for Anastasia Steele, notwithstanding her dumb soap opera name.

Fifty Shades of Grey made about $81 million in its first weekend. The bad news is the whole saga will be drawn out over three movies. I can't recall when kinky sex was last so boring. Maybe I'm just at that age..
at February 15, 2015 7 comments:

The whole Groundhod Day tradition must be one of the most weird things out there. But, true to form, earlier today, a rodent called Punxsutawney Phil stuck his whiskery head out of the ground and predicted six more weeks of snow.

It may not have been a hard one to predict as another big snowstorm was heading his way and he lives in part of Pennsylvania that's up there. 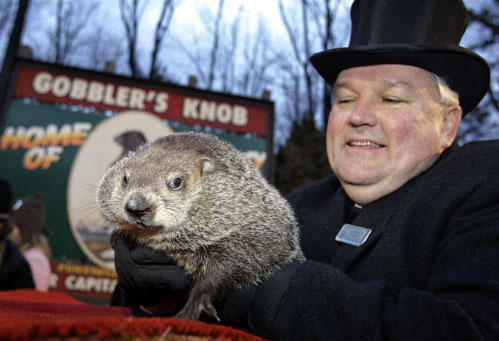 Phil's prediction is based on whether he sees his own shadow, which sounds rather unscientific to me, but I'd still trust the fat rodent more than Michael Fish.

Also, which is unsurprising, given his size, Phil seems to see his shadow more often than not - 102 times since 1887 and just 17 times without seeing his shadow. The last time he predicted an early spring in 2013, winter dragged on and a local attorney petitioned for Phil to be put out of marmot misery.

Phil makes his predictions at Gobbler's Knob which is uncommonly accurate because back in the day, the Germans who settled these parts actually ate the groundhog, according to Time Magazine. He was said to taste like a cross between chicken and pork. They even mixed in some vodka and mad Groundhog punch, which sounds less than appetizing.

Phil's accuracy rate is just 39 percent, which means his may end up on a menu somewhere. In contract his New York cousin Staten Island Chuck, boasts an 82 percent success rate.

To find out more about Groundhog Day you can read my old blog post, if it doesn't feel too much like going back over Groundhog Day.