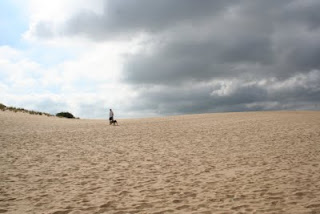 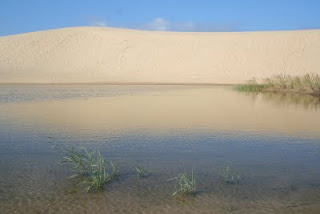 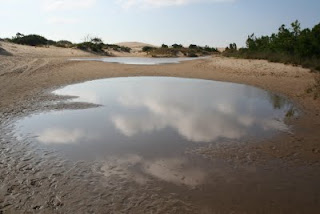 Sunday was a day of refracted sunlight and benign clouds that rolled across the azure skies of the Outer Banks without threatening cause any serious damage to anyone's mood.
When I first woke up the beach house felt the same as always. The holiday light still seeped through the plantation shutters in the morning, illuminating memories of long, lazy weekends in the days when I had more ahead of me.
But for the first time in nine years the familiar family portraits had gone from the bedroom walls and heirlooms were poking out of boxes on the floor. Order had been replaced with uncertainty.
Visiting my inlaw's home hasn't always been a pleasant experience and I confess there have been times when my foot has slipped off the accelerator as soon as we turned into their street and the car almost stalled.
But the idea of them selling up, leaving and searching for a cheap house in the dead heart of North Carolina after all these years filled me with sadness.
When I climed to the roof deck and looked over the sea and Sound, I wondered if it would be the last time I would gaze beyond the weather vane at the gentle roof contours upon a quiet Sunday by the sea.
And then, as if by instinct, I drove down the main highway averting my eyes from the neon signs, the strains of Kate Bush's Cloudbursting driving me onward from the stereo.
I turned off the highway into Jockey's Ridge State Park, where a vast sand dune towers over the flat inlets of these barrier islands.
With the sun still low in the sky and the clouds scurrying overhead, Jockey's Ridge was almost deserted.
Recent rains had formed lakes in the sand that weren't here the last time I walked across the dunes. Now they gleamed in the sand like circular washing basins that trapped the clouds and turned their fleecy undersides dark with refraction.
So I walked and I took photographs and I thought and felt the morning drift away as the sand warmed up on my feet.
And I wondered where the sand on the dunes would be when we were all displaced and gone and mankind had been rendered as insignificant as a glassy grain in the egg timer of history.
at September 17, 2009 5 comments:

I haven't blogged for ages because I was recently offered a job teaching English at a local high school.
My first reaction was surprise because I had been on about 300 interviews. This quickly turned into euphoria and then panic at the thought of telling my bosses at work who were lining me up for the dizzy heights of covering the city of Newport News.
The Washington Post was meant to be offering me a job in its Hawaii bureau but the letter failed to arrive. We live in a new condo development and the mail is unreliable.
The first thing that hit me about school was the requirement to be somewhere the next day at 7:30 am. I didn't really know what 7:30 a.m. looked like but, in fact, it was similar to 8:30 a.m. with the requirement for even more coffee.
I haven't looked back or slept since.
For the last week I have been familiarizing myself with school procedures.
Monday was tough. We were trapped in an introductory meeting for about three hours without a bathroom break. Now it's one thing explaining away the fact you have never taught, quite another the fact that you are a new hire who has wet his pants in front of the whole school.
I made it without an accident but it was a close call. It felt like being back at school.
For the rest of the week I have been trying to make sense of the craziness, the bell schedules, the online tardiness procedure, the absence procedure, 504 plans, blocks, AYPs, SOLs and HELPs.
The only thing I seem to have remembered is where the red panic button is on the wall of my classroom. A successful lesson involves not pressing it within the first five minutes of class.
And nothing is simple. Searching for a grade 10 text I decided on The Great Gatsby because a- The Great Gatsby is a great novel and B - there are at least 30 copies in the school book closet in a decent condition.
But one of my colleagues came over all skeptical when I mentioned Gatsby. I could tell by the criss crossed lines that appeared on here forehead.
"That may be more grade 11. You'll have to check with the Grade 11 teachers that they're not using it."
So plan B is A Farewell to Arms. But there appear to be only 26 copies - leaving me about 4 short and many are in a dilapidated condition. So do I tell the class most can have a copy but three luck souls will have to buy one?
It's these kind of considerations you don't think about when a small light goes on one night and you think: I want to teach.
at September 04, 2009 9 comments: