You have to drive all the way through Arches National Park to get to Devil's Garden but it is far from undiscovered. The trail from the parking lot leads through a narrow defile in the rock to arches, spires and a maze of narrow rock walls called "Fins." These form where persistent rainwater erodes parallel features caused by the uplift of salt deposits below the surface. 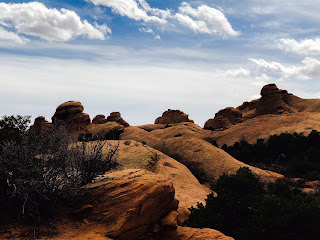 At least that's the official version. I prefer to believe that the devil was tending his garden one ghastly night and hewed these features out of the rock with his hideous pitch folk.

This section of Arches may be in God's Own Country but the weirdness of the red and rugged canyons here feels more like walking through a simmering slice of hell that the green pastures of heaven or Jerusalem which we all know is found in England's green and pleasant land.

I looked up to the red chimneys or rocks and the buzzards soaring above me and followed a trail that wound up the rocks like the spine of some long dead sea creature. There are many arches up here. Many may lack the 'wow factor' of Delicate Arch but it's thrilling to find one hidden away behind a canyon framing a bright green shock of foliage in the afternoon sun. 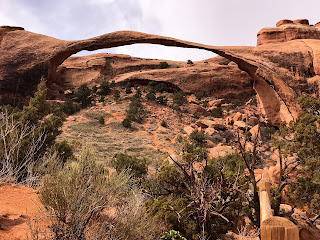 Landscape Arch, however, is far from humble. It towers between two rock walls, stretched to an almost impossible width.

In 1991, a 60-foot wide slab of rock fell from Landscape Arch and headed for the trail. Miraculously nobody was hurt but one brave or foolhardy visitor had time to snap a picture of the rock as it rolled toward him. 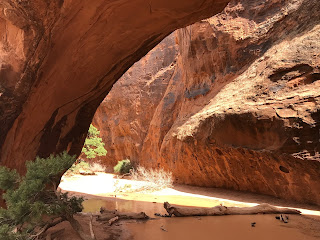 Devil's Garden is not a place for the meek. It bristles with dangers and the path heads up to a precipice. The crowds fall away the deeper you travel into Devil's Garden.


I felt alone but also at peace in the wilderness. I didn't all virtuous like Christ tempted by the Devil in the desert. I don't believe in the notion of finding ourselves in the wilderness or in uncovering clues in stream beds or under juniper bushes. I do believe that we all need to get away from it for a while and look on savage and remote places. I believe in letting the scale of it all wash over us, of letting go of our pent up obsessions.

It's a bit like that first time your parents introduce you to the night sky and try to explain the vastness of it all. How it would take millions of years to travel to the nearest star and the light you see from a celestial body may be long dead. 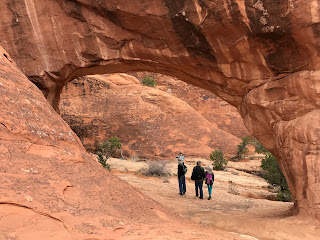 We are a vast universe within our own skin but we are as insignificant as the fleeting white flowers on the columbine. Even great rulers waste away in the vastness of the desert. In the words of that fleeting genius Shelley.

Look on my Works, ye Mighty, and despair!
Nothing beside remains. Round the decay
Of that colossal Wreck, boundless and bare
The lone and level sands stretch far away." 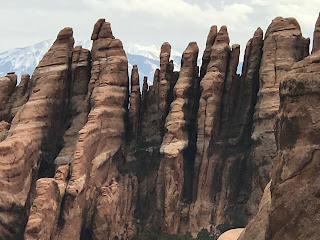