It's more than 10 years since I left Britain and I'm starting to wonder what's happened to it.

Certainly, Thursday night as the Brexit vote was counted was a stressful one. An exit poll suggested the lunatics would be beaten, albeit more narrowly than one might have wished. Like the vote for Scottish independence a year earlier, common sense would prevail.

Common sense is a British kind of thing, along with the occasional tendency to feel a bit superior. Sure the Brits have voted for extremism in the past. WMargaret Thatcher was a bit of an extreme maniac but at least she had a lot more upstairs than Ronald Reagan.

Of course,  Brits have always been a bit uneasy about the Europeans. We spent much of the last few centuries fighting the French and the Germans and before that the Dutch and the Spanish. Our football fans are still rooted in this mentality and we can't get over the fondness of the French for horse meat. It's a bit hard sometimes to understand this mentality, given that half of the country is probably of French descent post-1066. The Normans themselves were descended from the Vikings from Scandanavia and another quarter of the country was populated by Saxon invaders who were from Germany. The real Britons inhabit one village in Wales with a very long name.

I meandered somewhat from Thursday night but you get the idea. I checked the BBC website for the results and my smugness and belief that common sense would prevail was instantly wiped out. The vote for leaving the EU was ahead. Just about every provincial English town and city was voting for an exit. Only the Scots, a nation whose menfolk once day declared 'it's chilly up here - let's wear skirts,' were doing the sensible thing and voting to remain. 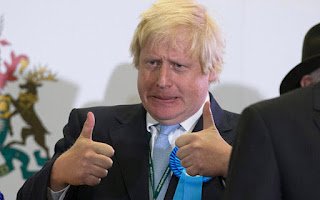 At least Boris is happy - sort of


I woke up to disbelief the next morning on social media. I don't have a single English friend who voted for Brexit. I don't know anyone who doesn't think Boris Johnson is a bit of a dick to put it politely,

Boris looked a bit shellshocked himself as he left his home on Friday and made his way past folks yelling "scum" to a press conference where he looked anything but triumphant. The Prime Minister had just resigned, the pound was bombing and half of the people who had voted to leave the European Union were going online to Google what the EU actually was. Boris looked ready to do a Lord Lucan.

The phrase "here's another fine mess you've gotten me into" which is often attributed to the hapless Laurel and Hardy came to mind, although apparently they never uttered it.

In the space of 24 hours, Britain had lost its coolness and those of us who hold passports has lost the chance to live in lots of pleasant white-washed places by the sea where we could drink good wine all day long.

It also meant we could no longer sneer at Americans. Voting for Donald Trump is no more nonsensical than voting for Brexit and America hasn't elected him as its president yet, to be fair.

A day after the catastrophe I'm still looking for silver linings from Brexit. For one thing, I'll be able to go to Britain without having kittens every time I see my bank statement and it doesn't make living in America seem so bad - at least until next January.

It's also given me a new appreciation of Scottish values. The replies to Trump's idiotic Tweet while in Scotland were a case in point. Comparing Trump to a "dehydrated oompa loompa" was one of the politer ones. Please do visit this site. I think I'll email a few to Hillary - perhaps not.

Not So Fond Memories of Down on the Farm

Facebook can be a strange media that hits you with the modern as well as bits of yesteryear and serves it in one big soup.

So, for example, I have a feed from the first newspaper I worked on. I usually ignore it but from time-to-time something will pique my interest.

When you live in America, you can fall into the trap of thinking Britain is the kind of place where people play cricket all day, ride bicycles with big baskets and say nice things to each other. My feed from the Western Morning News reminds me otherwise. 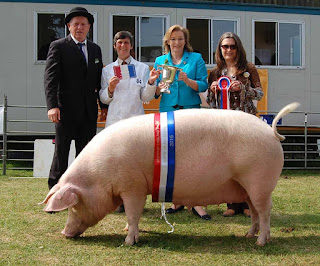 On the mean streets of Devon and Cornwall, some guy has been busy attacking his wife with a hammer in Painton, while some other guy has been busy goosing his flock of sheep on Dartmoor - that article didn't say if he was sheeping his geese.

Cars on the Tamar Bridge may be killing mussels and the World Dad Dancing Championships are returning to Devon.

It amazes me to think how seriously we used to take these kinds of things when I worked on the newspaper. Maybe old Millennial Me would have had a lot more fun than Back then Me.

Out of curiosity, I read the farming pages. It's a well-known fact that nobody apart from farmers reads the farming pages, that farming correspondents are invariably devoid of all social skills and they smell of manure and no reporter ever liked to do this job.

I still shudder at the thought of being sent one year to the Holsworthy Show to report on farming results. Covering agricultural shows involves a whole different language and it wasn't one that I wanted to learn.


The interbreed terminal sire progeny group championship then went to the Blue Texel group from Rhys Cooke, with the Suffolk trio from Chris Holmes in reserve spot.
In the well supported pig section the interbreed title went to Hampshire Gilt Blewett Precious 76 from J E Sage, with the Large Black leader, Finnington Maltida from Jack Haywood following up in reserve.

It raises a lot of questions, right? Such as what's a well-supported pig. Is it a pig with a large piggy bank? And who's interbred? The animals or the farmers?

The Holsworthy experience was a thoroughly miserable one. I had to drive for about an hour-and-half on manure-splattered roads in the driving rain to stand in a foul smelling barn wearing my undersized city slicker reporter's mac in deep-in-the-heart-of nowheresville.

When I finally got to interview a farmer he looked at me in a strange way as manure built up on my shiny shoes and my notepad tumbled into the mud.

"So what make of cow is this?"

The farmer looked distinctly unimpressed. I figured he might even  be a breeder but I didn't want to ask.

"Can't you see that's a cross limousin steer, not a cow? You're not from these parts"

At that point, I was rather glad I wasn't from those parts. Had I been from those parts I might also be sized up a prized cow. I had no idea what a limousin steer was, although I was badly in need of a limousine to get me out of the poo.

I had blanked out the ideas of agricultural shows for decades but after reading the report I was left in a state of bewilderment that there are still grizzled old farming correspondents on rural newspapers who are going into work every day to write this slurry.

I know I've had periods when I've thought social media was great and it's a component of my job, but I'm beginning to wonder. This isn't a new thing but the downside of social media was reinforced by the story of gorilla death mom.

This is a lot more serious than Chewbacca Mom (see previous post) but another example of how social media is leading to a collective loss of our minds. Gorilla death mom is Michelle Gregg from Ohio whose four-year-old kid climbed into a compound at Cincinnati Zoo and was mauled a bit by a gorilla called Harambe, who was then shot dead by zoo keepers.

The episode has sparked a barrage of online hate, most of it directed at Gregg. Judging by the level of vitriol you would have thought Gregg had shot the beast herself in the manner of Walter Palmer, the friendly neighborhood dentist who killed Cecil the Lion.

People loosely described as netizens took to Twitter, Facebook and the like to suggest, Gregg rather than Harambe should have been shot and to generally denigrate the mother as a low life. There's even a suggestion that the police could bring charges of neglect.

This is all rather disturbing as nearly everyone I know at some time or another has lost their kids.- granted  people without kids are less likely to. I succeeded in losing two kids in the space of as many minutes at Disney. Had the park not employed hyper-vigilant people, they'd probably still be wandering around the Magic Kingdom wondering if the line for Thunder Mountain had subsided.

What's worrying about the Gregg episode is how it illustrates how social media has set the playground bully free in a larger arena. It's a lot easier to say these kinds of things online than to someone's face. A zoo-type feeding frenzy then ensues with the mainsteam, and not so mainstream media, feeding off social media. This Daily Mail article is a case in point. What's the none-so-subtle message here and why is it relevant that the kid's father has a long criminal record? This article is really saying 'hate these people because they are black." Oh and they are overweight too - so that's a double whammy.

You have to wonder if there would be the same chorus of hating if a well-mannered, middle-class white, 70 year-old grandmother had a lapse of attention that led to her kid climbing into the gorilla enclosure.

This story also raises one more obvious rhetorical question to me, namely:

Shouldn't zoos construct enclosures that make it impossible for four-year-old kids to climb in and play papers, scissors, rock with a 450-pound gorilla? Just saying.

The concept of the social media bully would be less frightening if it wasn't so pervasive. Currently one of two candidates who is running for what is nominally the most powerful office in the word has made it this far by name calling on a grand scale. Marcus Rubio became "Little Marco," Ted Cruz was Lyin' Ted," and Hillary Clinton is "Crooked Hillary." It seems a rather long time ago since Donald Trump declared Rosie O'Donnel to be "a pig, a degenerate," back in the good old days when nobody took him seriously.

I always have this image as Trump as the punchy misfit who was bullied himself at school over his tangerine face and dead duck hairstlye and wrecks his revenge in shoes with steel tips behind the bike sheds, yelling "crip. loser, big ears or retard" at his victims.

I'm not saying politics has always been a gentle pursuit. Insults are part and parcel of the whole process.

Abraham Lincon once declared as a rejoinder to Stephen Douglas's arguments in favor of an expansion of slavery that they were "as thin as the homeopathic soup that was made by boiling the shadow of a pigeon that had been starved to death."


Trump is the inheritor of the party that Lincoln brought onto the political scene which is really rather tragic when you think hard about it.