The Lincon Memorial and the Fat App

I took my daughter on a mini vacation to D.C. recently because the need for a cultural injection can get overwhelming when you live in a place known as Tidewater.

I'm not quite sure that's what we got, though, thanks to the fat app. Some time ago Zara was given an iPod. I'm not sure if this is the right term. It's like an iPhone that you can't make calls on but you can do some kind of face time as well as playing the obligatory games. 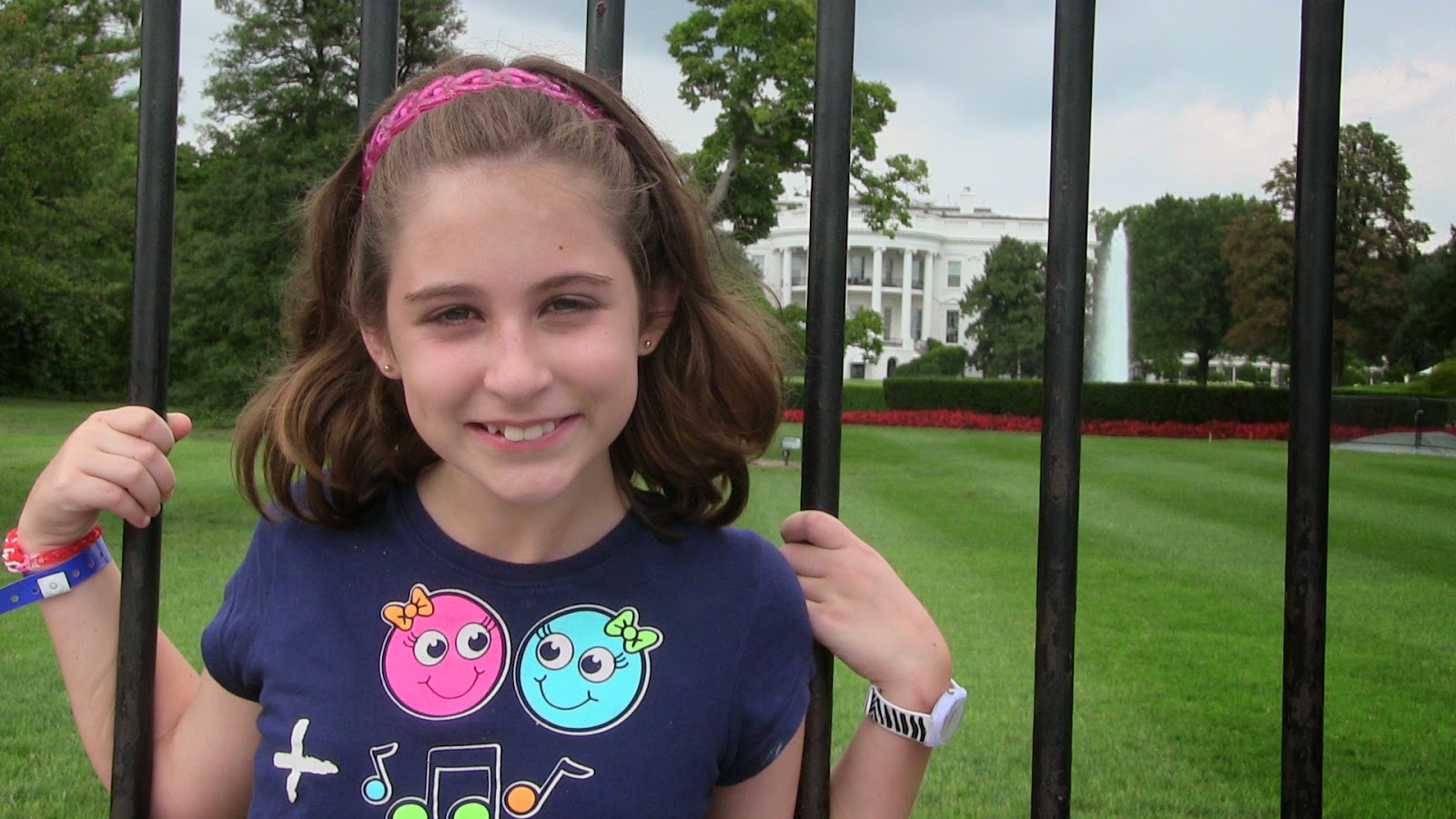 I didn't think much about it as we left the camp ground and prepared to get our culture vulture wings out. It's funny because I have backpacked around Europe in the harshest of circumstances but as soon as I go sightseeing again I revert to being the worst kind of tourist. The middle aged, efficient woman at the camp ground explained meticulously how to use the bus passes which were also train passes and handed me a leaflet giving clear instructions on how to get into D.C. Still I found myself switching into tourist mode - a pose which involves one hanging out tongue, a slight lisp and cricked neck and obvious questions such as "Is that the bus?" while pointing to a stretchy out sort of vehicle that looked very bus-like.

Once we got to D.C., Zara got all excited about the first monument she saw - some general on a horse on a big plinth and proceeded to take 100 pictures of it and then lost interest. 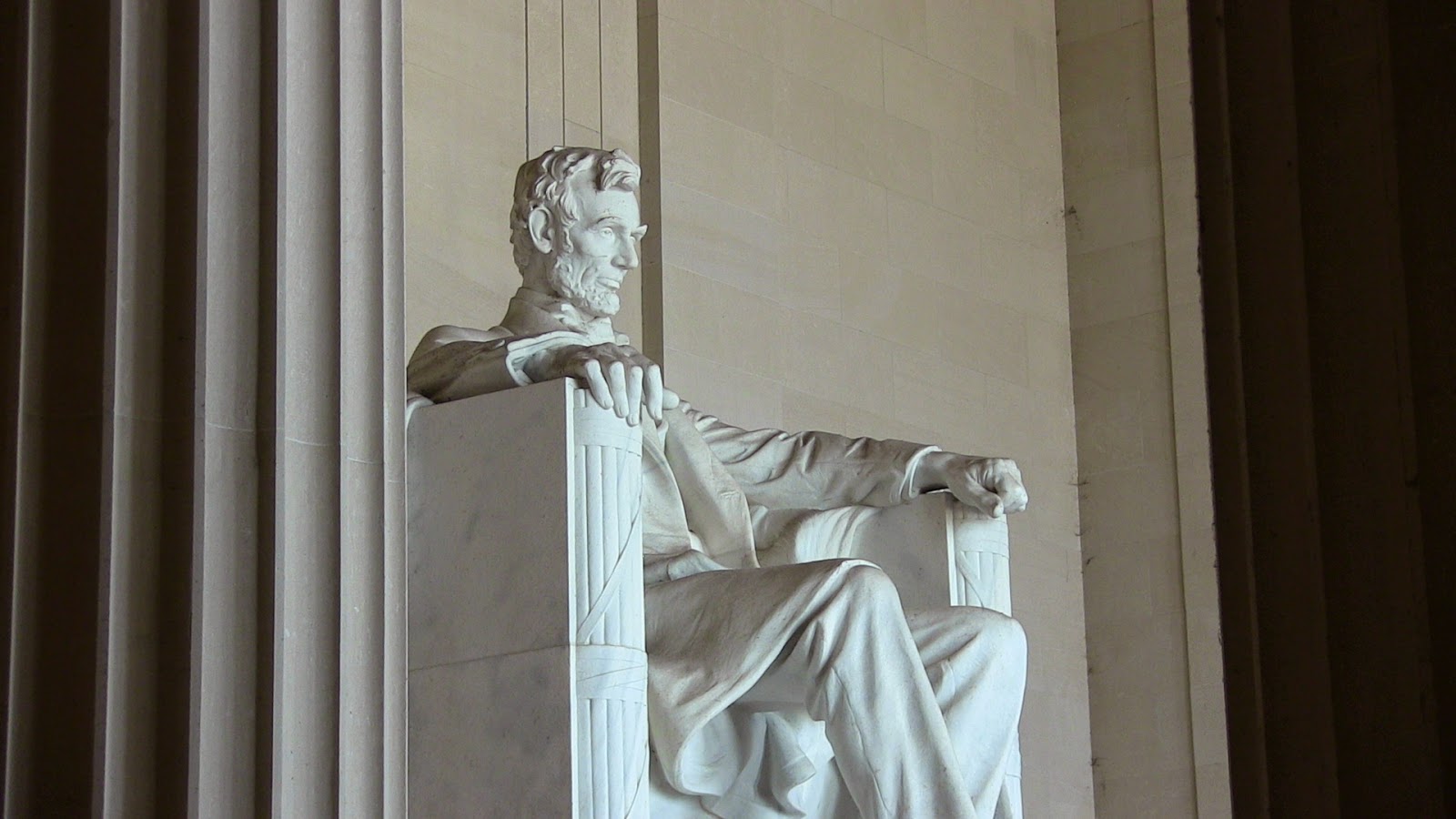 Undeterred, we pressed on to the Natural History Museum. Zara was briefly interested by the Sponge Bob letter box before disappearing into iPod world. The pouncing stuffed tiger and giant whale got her off it for a short time - not so much the talk about evolution which explained how humans are descended from a rat-like creature called Morgie. The narrator may not have realized the profound effect of that unfortunate name of our great grandmother x million years ago. Morgie was the name of the small girl who released Zara's prize balloon at her fifth birthday and was hitherto shunned for the rest of her existence. Just the mere mention of the name was enough to reawaken ancient horrors - a bit like Palestine. But different, really.

Still there was plenty of time for us to realize that the Washington Monument is a lot further away that it looks and the Lincoln Memorial is even further away than that. The memorial held some interest until Zara found the fat app.

As we are ascending the escalator she is saying : "fat, fat, fatty fatty fat." into the microphone and playing it back into am image of her face with an extra 200 pounds and a wagging tongue in a small mouth hole in the vast expanse of errr fat.

"If you upgrade you'll get another 400 pounds with pustules and break-outs," she is telling me.

"No thanks. Let's save the dwindling account for Starbucks."

A woman at the monument looked less than impressed at the prospect of pustules. Lincoln himself looked rather stony faced, although I am guessing that's the way he looks anyhow.

Still we pressed on against the odds. At the National Museum of American History I tried to describe the significance of the Greensboro lunch counter but by this time Zara has got hold of the old person booth and was proceeding to give herself extra lines and gray hair.

On the way back we sat on the subway train next to a woman who was probably pushing 400 pounds, albeit minus the breakouts. Zara reached for the IPod. I broke into a nervous sweat.
at August 26, 2014 8 comments:

The Vietnam Veterans Memorial - A Monument to Hubris

I had always wanted to visit the Vietnam Veterans Memorial because it strikes me as being one of the most moving legacies to the futility and mass sacrifice of war.

Just as there is a long and twisted saga to the Vietnam War there is a tale behind this stark wall that contains 58,272 names on reflective stone from Karnataka in India.

It was designed by Maya Lin, who won a design competition as an unknown 21-year-old architecture student, and immediately stirred up controversy. 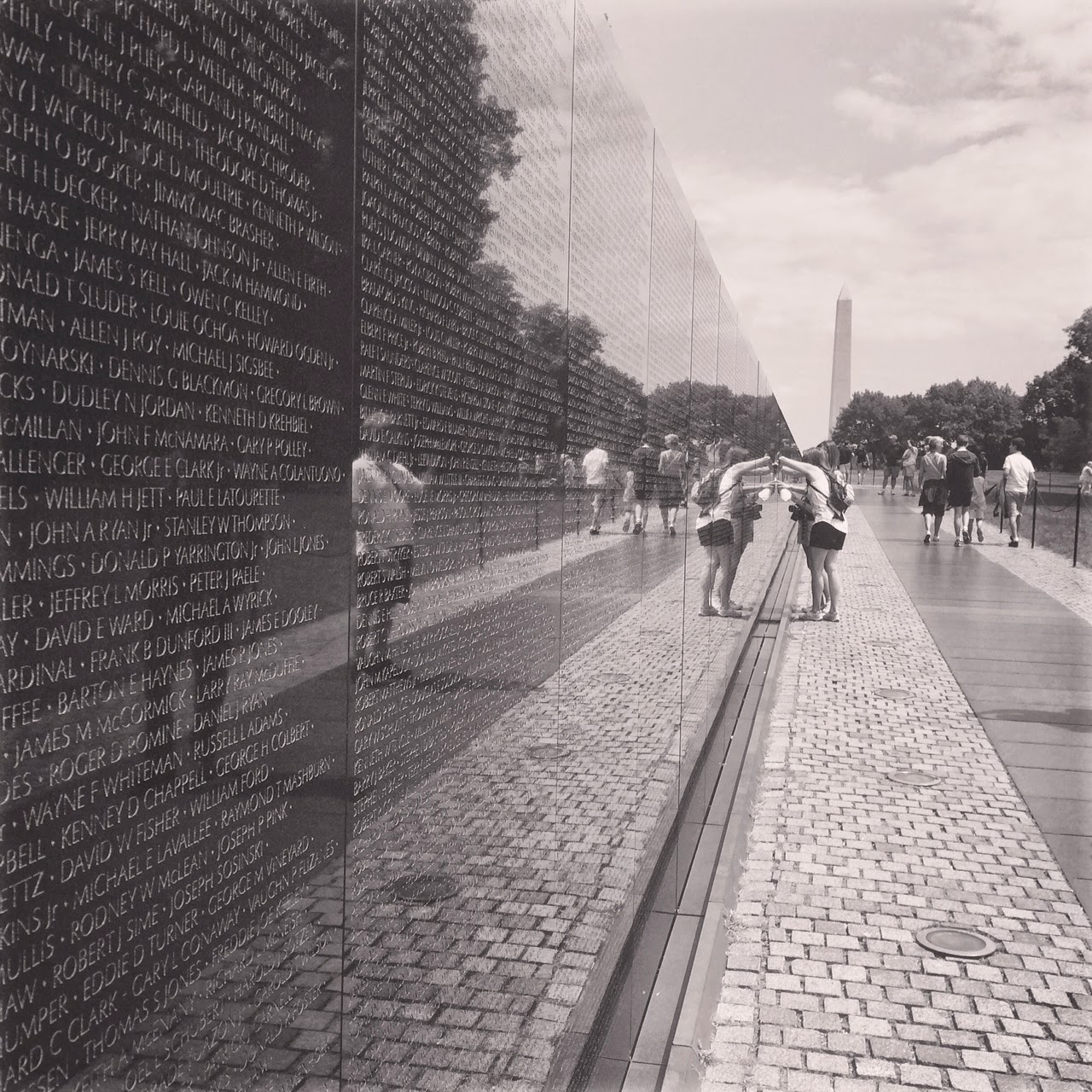 James Watt, a Secretary of the Interior under Ronald Reagan, even denied it a building permit initially. James Webb, initially a supporter, said: "I never in my wildest dreams imagined such a nihilistic slab of stone."

The strength of the opposition led to a more conventional memorial - The Three Soldiers - being placed near to the Memorial Wall. Lin objected to an idea to place it near the entrance to the wall and a compromise was reached.

Like many other projects that are controversial at the time, the Wall has since become accepted as an institution, and is as integral part of the D.C. landscape as the Eiffel Tower - another project that caused an outcry - is to the Paris skyline. It evokes many feelings including starkness and solitude and there is much that is poignant about the reflections of trees and passing clouds on the names of the vanquished.

The Vietnam War is still is less comfortable fit. For a while I read widely about the Vietnam War in the vain hope of finding a justification. It became clear this was less a war of design and ideology than a slippery slope - as smooth as the wall itself - that dragged hapless American presidents deeper into the mire - leading to unspeakable horrors on both sides.

The veterans paid twice over - both in terms of the physical and psychological trauma they faced and the fact they were shunned and mistreated when they returned home from the misplaced war that America lost. The wall is stark but its most powerful aspect is the sheer volume of names in small type that run away to a distant vanishing point. This is less a monument as a warning about futility, the dangers of stubbornness and why we should always question the motives of those in the faceless offices and big mansions before heading blindly into the jungle.

The Terrible Great War is Remembered in Ceramic Poppies

While the wars of the 19th Century had been bloody, few people could have realized what was in store for them. In fact many expected a swift victory. Yet by 1914 mechanism had marched faster than the hooves of cavalry forces to the point when it could tear armies apart with impunity. 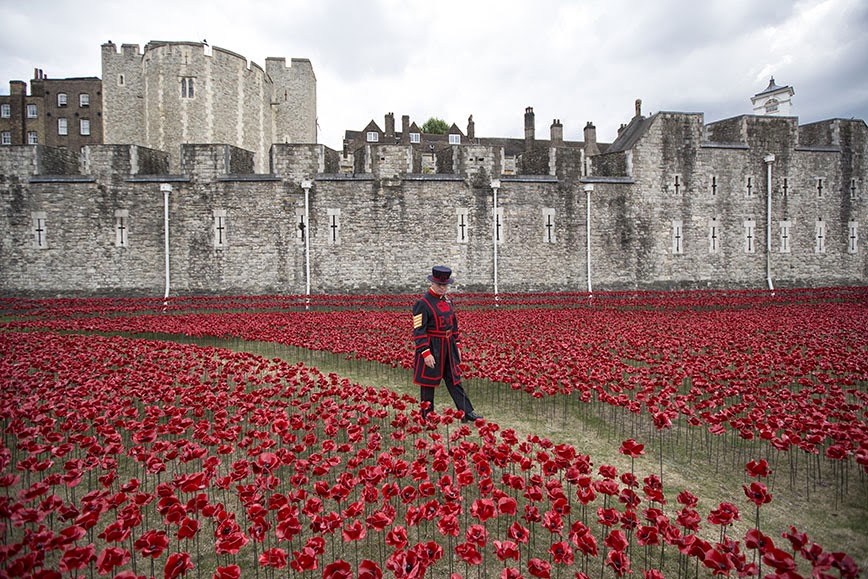 The new dynamic became obvious as the Germans marched into France. Germany was acting on a plan drawn up in 1905 called the Schlieffan Plan in which General Count Alfred Von Schliffen had concluded Germany could not fight a war on two fronts and to be decisive it should deal a decisive blow to France in the west.

Germany invaded west through Belgium setting the scene for the First Battle of the Marne from September 6 - 12, 1914 in which the Germans were repulsed from capturing Paris. Less than a month into the war it was apparent how flesh was no match for shells and the French lost 250,000 men at the Marne, the Germans a similar number and the British more than 12,000. 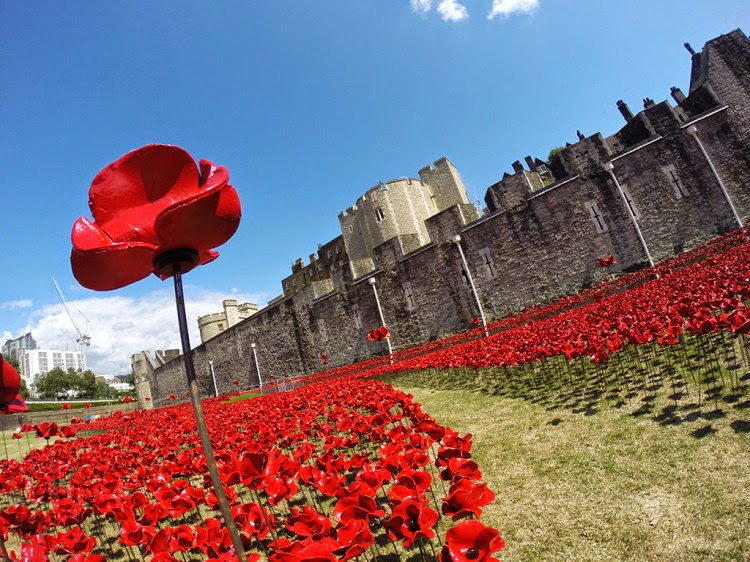 As it became apparent that the Germans would not easily knock out French, both sides stated to dig trenches and the four years of mud and blood and abject terror that characterized trench warfare ensured.

Now and again the combatants would try to break the deadlock with costly offensives. During the Somme offensive from July to November, 1916, Britain lost more than 350,000 men, France more than 204,000 and Germany more than 465,000 men. The figures fail to convey the full horror of the battlefield, of men cut to pieces on wire, or lacerated by guns, suffering agonizing deaths in shell holes in no mans-land. Few battles in history have so aptly summed up the futility of war. The Somme secured the Allies a few hundred yards of blood drenched soil.

While we associate World War One with the trenches of the western front, there was an equally bloody war going on between Russian on one side and Germany and Austria Hungary on the other in the east. Indeed the Russians suffered higher casualties than any other army, serving as a catalyst for the Russian Revolution.

In the south the Italians were fighting the Austrians in the mountains and there was a bloody war in the Balkans while the bloody and abortive attempts of the allies to attack Turkey at Gallipoli, was one of the most tragic episodes of a war steeped in tragedy.

It's hard to imagine such horror in retrospect and a war that was fought for no real purpose. Once while driving through France, I came across the River Somme and a dark curiosity came over me. Then I remembered Uncle Charlie who rocked in his chair and talked about nonsense, never once recalling his days as a stretcher bearer at the Somme. It was true for much of the country that those who came home seldom recalled the horror that was the Great War. Some were driven mad by the sound of shells and disappeared into homes to die in obscurity 70 years later. 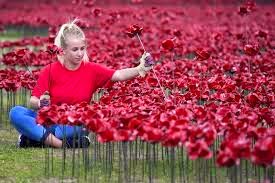 Yet I was filled with a curiosity to see the plain white crosses spreading across these bare hills and the massive memorial that rises from the bones of the ground at Thiepval to those missing who never came home from the Somme, hideous and heavy with the weight of the names on its sides.

We should never forget the War to End All Wars, which held the seeds of another war every bit as horrible 25 years later, but I have seen little publicity about the anniversary of the First World War, given its significance.

However, in London a beautiful exhibition at the Tower of London called Blood Swept Lands and Seas of Red by Paul Cummins is a poignant reminder of what was lost. It will be officially unveiled on the anniversary of the declaration of war on August 5 and features 888,246 ceramic poppies planted in the moat of the tower, each one representing a British military fatality in World War One.