This summer is icooking my brain. The coffee turns my mouth sour but I still slug on it, drinking to the base, hoping to revive myself and to conjure up an original idea. It's late afternoon. I think of stagnant ponds, and rivers thick and sluggish with oil in a flat and industrial landscape. The heat out here is too thick to breathe. Heat index is the most over-used phrase. That and triple digits. There's no getting clean from it. Shirt and pants stick. Skin burns, necks ache. 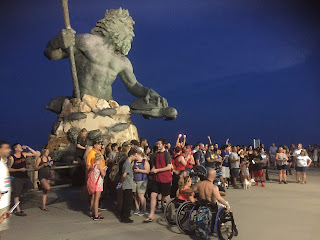 It seems too long since we lay on your bed and looked at each other steadily.

The people gather under Neptune. They interact very little. The look into the small screen - not the TV of yesteryear but the portable small screen. They catch Pokemon on the screen. They jabber with an other worldly language about squirtle. Squirrel, I say. No Squirtle - get with it, Dad. Where have you been? Under a rock? Under the sea bed like Neptune who frowns steadily at the storm-laden sky.

But I was with it some time ago, in another place and another era. There was a crowd in white, winding from the bridge at Magdalen and all of Oxford was coated in the glory of morning and unfilled potential and gleaming things to come. I saw them then, young and bronzed and lithe across the water meadows and the domes and the spires,  jumping with abandon in the water. I thought of Brideshead and imagined them now; fat lawyers and accountants behind dust-filled desks.

I wondered lazily if the bridge was blocked again and I thought of you - looking at me steadily across the heat haze, distilling a perfection out of all this imperfection.
at July 29, 2016 2 comments:

It's true to say Reportage is a bit of a mess. Today I finally went back to it after a long time away and tried to make some sense of it. One reporter was working on an incident of police brutality. The other human trafficking in Cambodia. It probably needs some pixie dust sprinkled on it. That or a little less reality. There were chapters in various takes that seem to overlap. There are people doing unexplained things because the chapter that gives it context has disappeared and I don't even like the working title. By the time I finish it the newspaper industry may be ancient history.

After I copied and pasted sections, I found I had almost reached 50,000 words. So only 50,000 more to go. I should be able to crank that out at Starbucks one lunch time. At least I'm back on the train and not hanging out drinking beer in the unpleasant station cafe. 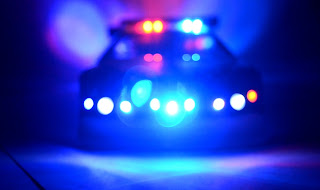 
Laurent Bourgonville closed the curtains earlier in the day even though sunlight was still barreling down the street. Linda was ill again and being unbearable in the way only Linda could be when she was ill. He finally sat down in the pleasant semi-darkness and sunk into the old sofa when he heard her hollering again from upstairs, her voice sounding like one of the sirens he heard on the ships in his navy days.

A spasm of pain shot down Laurent’s leg as he stood up and hit his head on an ornamental owl on the shelf above him. He silently cursed Tracy and her barn owl fetish.

He shuffled through to the kitchen and momentarily considered the tea would be enhanced with a well-aimed globule of spit, just a small, neatly crafted one lovingly swilled around his mouth that blended in with the greenish murk.

He was standing on the bottom stair when Linda ordered him to stop in his ponderous tracks. “Lori. What’s going on outside?”

“I’m not a clairvoyant. Do you want your tea first or do you want me to look out of the window?” He knew the real answer would be both simultaneously, but even Linda wasn’t going to articulate that thought.

“Look out of the window, quick.”

He felt like telling her he didn’t do anything quickly at the age of 78, but he moved to the window and tugged on the carpet. “Good Lord.”

“What is it, Lori? What is it?” her voice had risen about 10 octaves like a miner bird’s, and he wanted to torture her then. The best he could do was slow delivery.

“We don’t have those on Beaumont Avenue.”

“What was that Lori?”
“I was saying there are quite a lot.” He counted six cars and a large truck that had the words “Mobile Command Unit” on the side.

There were flashing lights from ambulances too, and the street was cordoned off with yellow tape. Laurent had driven past many scenes like this in Chicago but never here on his street.

It felt like another city had been transplanted to this respectable street in Seatown.

“Aww no not for dead people, surely.”

The Battle of the Somme - A Grim Anniversary

A long time ago I had to drive down to Paris late at night in my battered Renault. In the early hours of the morning, I was getting sleepy and pulled over to a rest area to get a 20-minute nap. There was a slight chill and I tugged my jacket closer to me. Outside a thin mist was creeping across the flat treeless fields and clinging to the rivers that crisscrossed them. I remember the bleakness of the place and then I saw a sign that chilled me to the core. It read "River Somme."

I slept fitfully but decided to wake and get back on the road. The name had unnerved me and I thought of all the ghosts of the anguished souls who once struggled and died in these fields. 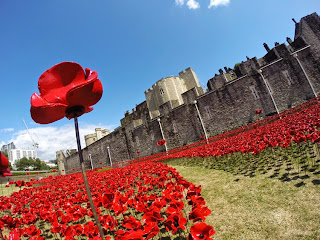 The first day of the infamous Battle of the Somme was exactly 100 years ago today in 1916. It still stands as a monument to a barbarity that is almost unparalleled in the last century.

The bloody mechanized war that pitted France, Britain and Italy against Germany, Austria and Turkey was in its second year. For months on end men lived and died in waterlogged and rat filled trenches on the front line, in constant dread of hearing the order to go over the top.

At Verdun, a 300-day offensive as the Germans battered the French lines had left 800,000 soldiers dead.

In an attempt to relieve pressure on Verdun, the British army launched a massive offensive further north on the Somme. In the week before the battle began 1.7 million shells were fired by the British at the German lines to break up the barbed wire and demoralize the enemy.

Yet on July 1, when 100,000 British troops  were sent over the top, they found most of the wires still intact. The soldiers were out in no-man's-land being mowed down by German machine guns. There are many accounts of the terrors of the first day of the Battle of the Somme, of men missing arms and legs who suffered drawn out deaths as the life bled out of them in shell holes. On the first day of the battle, the British suffered 57,000 casualties including 19,000 men who lost their lives. It was the bleakest day in the history of the British army.

At the end of 141 bloody days on the Somme, the British, French and Germans has lost 1.5 million men and the British had gained a few miles of waterlogged soil that would be recovered by the Germans in 1918.

Today the Battle of the Somme is just another obscure piece of history like Waterloo or 1066. I had a great uncle who was a stretcher bearer during the battle but he never spoke about it and is long gone.

On the way back from Paris, I returned to the Somme in daylight and drove down deserted roads until a thickset and brutal structure rose from the ground. It was the Thiepval Memorial to the Missing of the Somme, the 72,000 plus British Empire servicemen who never came home. The Somme remains an eerie landscape forever overshadowed by the Great War. Neat cemeteries of simple white crosses dot the dark hills here and the towns of Picardy seem mean, strained and cowering.

Sir Edwin Lutyens designed the Thiepval Memorial. The architect is better known for his country houses and his work in New Delhi, settings for cocktail parties and polo on a sunny day.

Yet by the time the monstrous guns finally fell quiet on the Western front, the days when Britain ruled half of the world were over. The aura of invincibility had been swept away in a few hours as the smoke cleared over the Somme and a generation was cut down. Those who lived went home but many of them were never the same. The blooded ghosts of the battlefields followed them to the quiet country lanes of old England. Thousands suffered shell shock, including the poet Wilfred Owen who was killed on the last day of the war but whose lines lived on to give it a frightening poignancy to later generations.

Unlike World Wat Two, the Great War was not a clash of ideologies and it's difficult to portray it as a battle of good against evil. Rather, a complex set of treaties led the great European powers into a war that nobody wanted to fight. The terrible global conflicts of the early 20th Century were the catalyst to the European integration that has unraveled of late. It's a stark testimony to how quickly things can go wrong.

What passing-bells for these who die as cattle?
Only the monstrous anger of the guns.
Only the stuttering rifles' rapid rattle
Can patter out their hasty orisons.
No mockeries now for them; no prayers nor bells;
Nor any voice of mourning save the choirs,
The shrill, demented choirs of wailing shells;
And bugles calling for them from sad shires.
What candles may be held to speed them all?
Not in the hands of boys, but in their eyes Shall shine the holy glimmers of good-byes.
The pallor of girls' brows shall be their pall;
Their flowers the tenderness of patient minds,
And each slow dusk a drawing-down of blinds.