Between a Rock - Reflections on Arches National Park

The desert can be an unforgiving place. Still, there are times in your life when you crave extremes. When I headed to Moab, I wanted to be between a rock and a hard place, although the cliche jars. I wanted dry stream beds and cactus as brittle as broken glass. 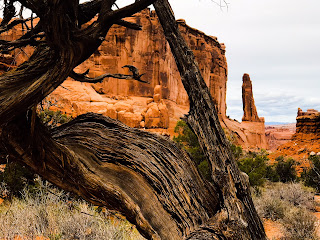 Perhaps I was haunted by that time when I drove back through Bakewell, so many years ago back through the Derbyshire Dales with their quaint tea rooms and honey colored stones. When you are pursued by your intrusive thoughts, you don’t want Bakewell pies.

You don’t want meandering brooks and bridges and hordes of tourists or to wander around Chatsworth to see ladies in frilly frocks. You want sand as hard as iron and unyielding rock faces.

I wasn’t so shaken this time but there was the sad realization of the breaking of the human spirit, of something that seemed of substance but crumbled like a foundation of sand. It had been a long journey across the bone-dry ridge to a shimmering mirage. Had the last few years been so illusory like the world viewed a looking glass, down a rabbit hole?  Perhaps I had been blinded by the lidless sun. I had ignored her jagged flaws and discounted my own. I had glossed over it, belittled it. 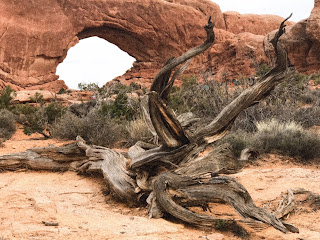 I had learned lessons too. Pedestals are only for athletes and the memory of the elevation fades as soon as they step off. Gold is a base metal and it gleams rather than glitters. Nobody is perfect. Not even a perfect stranger. The colors leach under the glare of the desert sun. 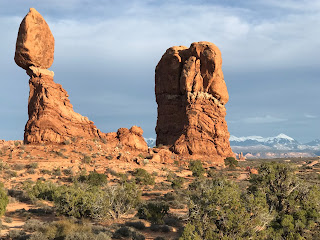 Today we retrace some of those footsteps. I fall into an easy rhythm next to her. I adore her but I eschew those old notions of perfection. We are far from symmetrical. We are two steps from the edge. The human spirit is like Balanced Rock and it will fall into the abyss without care.

Moab can quickly remove the layers from the soul. The earth here is so red and the approach into the town with its gas stations, wreckers’ yards and Jeeps chewing up the earth, made me feel small.

I drove to an unprepossessing hotel and paid above the odds for a room. I didn’t shop around. I wanted to get out of Moab and into Arches. I wanted to see the weirdness, the deformed rocks, the high arches or stone and the far-off snows of the La Sal Mountains, 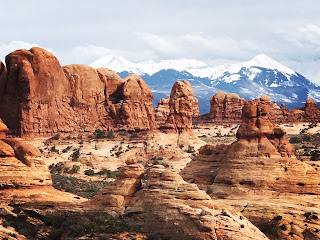 Arches does not disappoint. The only downside is the crowds. After enduring the long lines to the visitor center, I drove up to Park Avenue and walked down a dry riverbed surrounded by high buttes. The last time I was in a place called Park Avenue it was in the middle of the city. We drank too much and forgot where we were staying incurring the wrath of a New York cabbie. The place with the canopy. Behind the big tower.

Park Avenue in Arches has towers too, hulking great masses of sandstone that line the path. The heady cocktail of languages here reminded me of the Parthenon or Venice. However, walking usually thins out the crowds and Park Avenue was no exception. Within 20 minutes, I was in relative solitude under the austere castles of rock. 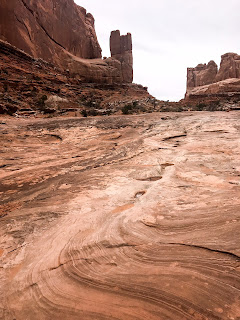 I fell into a pattern, stopping at the viewpoints along the route. I admired the petrified hills that formed a labyrinth of hobbit homes into the desert, the livid green of Fiery Furnace with its fierce yellow foliage.

Our spirits crave an illusive perfection. We have built cathedrals replete with arches to glorify God for centuries. Still, we worship such structures. This national park has the largest concentration of natural stone arches in the world. There are more than 2,000 but most of them are unvisited.

At the trailhead that features Double O Arch and Double Arch, I started to get a feel for the structures that define the park. Many of those who went to see the arches had the air of visitors ticking off items on a shopping list. They talked about home prices and neighbors with drug problems. They used names of places in California that made me feel far from home. 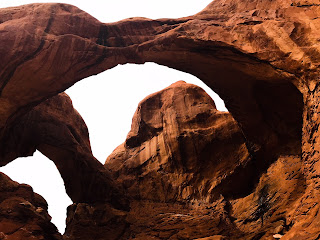 It seems crass to talk about home prices amid the serenity of the arches, sacrilegious even.

Evening was approaching by the time I embarked on the path to Delicate Arch.

It’s described as a short trail of 1.5 miles each way. I had little water but the temperature was falling. The reds and greens of the desert came alive as the sun slipped away. Delicate Arch is the most photographed place in Arches National Park and it was crowded even later in the afternoon. Still, there is serenity here in open spaces, even though the path felt like far longer than 1.5 miles and my last gulp of water was soon gone.

So many iconic places can be a disappointment in real life. The Bridge of Sighs is so small, the Parthenon always seems clad in scaffolding.

Even the Grand Canyon can fail to convey its sheer size. Delicate Arch is as breathtaking as I imagined it would be. 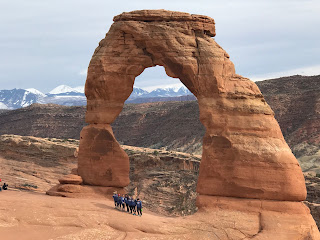 The arch rises from a bed of smooth rocks framed by the snow-capped mountains. It's a lovely and lonely place where it's possible to steal a moment away from the crowds. Although Delicate Arch is the highlight of many visits to the national park, I decided to return the next day to explore Devil's Garden. 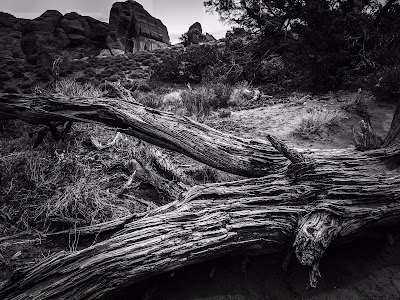