West Virginia - the Half Promised Land

I had a lot of exotic ideas about where I would take the kids on vacation this year but they never really panned out. The holiday funds were eaten up by lawyers and acrimony and suddenly the summer that began with high hopes of freedom was almost over.

That idea of a villa fringed by palm trees had been receding over the last two months until it was reduced to a tiny tent amid the dust of an obscure lake in West Virginia. I didn't let the downsizing of my dreams depress me unduly. I had never been to West Virginia so it remained a mysterious and uncharted place. And from a British mindset West Virginia seems like a fascinating and insulated place beloved of hillbillies, people who handle snakes in churches and twangy mountain singers. 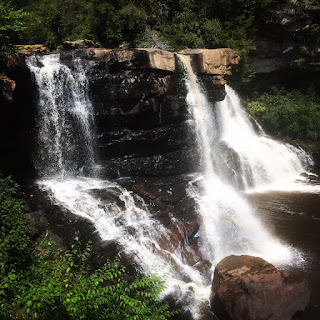 The trip out did not exactly go according to plan. In hindsight it was probably not a great idea to move my furniture to my new apartment in the morning and embark on a five hour drive in the afternoon to a campsite.

We didn't hit the road until 2 pm and the specter of putting up a tent in the pitch dark aided only by a cheap Wal Mart flashlight was unappealing. Worse still my eyelids were drooping on the road after just an hour before we even reached Petersburg. It was clearly a time for desperate measures - otherwise known as gas station coffee. This stuff can strip paint off walls and it did the job of giving me a massive jolt and keeping me awake, although it failed to save me from a Siri malfunction a few miles north of Richmond. My Siri is actually a man with a British accent but he's still amazingly stupid and once tried to send me to a location in Australia when I was seeking directions for five miles in Virginia Beach.

The Siri malfunction and the inevitably static traffic on I-95 meant that three hours into the drive, West Virginia remained a far off dream. Admitting defeat I pulled over into a Super 8, thus putting off the prospect of arriving at a camp site at 10 p.m. and falling into a half deflated air mattress. I once read in a Rough Guide that Super 8 is the best budget motel and I had few complaints once I had called for instructions on how to turn on the light. I'm not sure if $80 a night counts as budget but it's always a bonus to wake up without roaches in one's mouth I find. 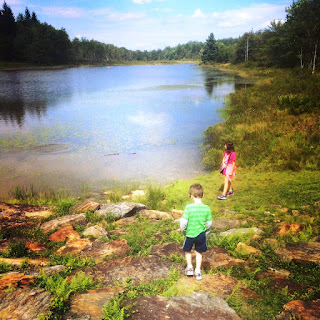 The only downside of the hotel was it was close to the retail park from hell. When you are with kids hell equates to the number of stores and the presence of Five Below.

The next day it took another two hours to reach West Virginia but I am happy to say we made it. We pulled over at a viewing area and took pictures of mountains that looked rather similar to those in Virginia. Then we headed over empty roads and past high hills studded with somber wind farms to reach Blackwater Falls State Park.

If there is one constant about West Virginia it's the fact it seems more empty than anywhere else I have been to. Even Blackwater Falls - a popular state park emptied after hours and there were just a handful of tents and campers in the camp ground.

Blackwater Falls State Park is breathtakingly beautiful. Of course by the time I reached the viewing platform, the five-year-old had seen it and done it and wanted to head back up the path. We also tried some trails - a concept that always leaves the kids whining and groaning. Amid the demands for candy from non existent candy machines, ice cream and crazy bear hats it can be hard to appreciate beauty. But looking back this place was beautiful with the added advantages of not having a Five Below for hundreds of miles.
at August 28, 2015 No comments:

The Meaning of Scot-Free

When I was recently editing some copy with the phrase "Scot-free" in it, I immediately started to wonder about the meaning of the term. My first reaction was here we go again - this is clearly a reference to Scottish people being cheap.

Just yesterday I drove past a rather basic looking hotel in Virginia Beach called the Mac Thrift Inn . Its sign featured a skinny boned Scotsman who was clearly too cheap to afford underpants under his kilt. These old stereotypes endure but is there anything to them? 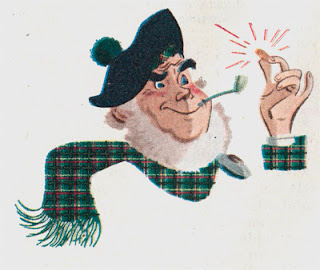 Interestingly enough, the phrase "Scot-free" has nothing to do with Scotsmen. There's a perception in America that this phrase is linked to the famous case of Dredd Scott.

Scott was a black slave who was born in Virginia in 1799. In a number of high profile court cases he sought to win his freedom before he was made a free man by his owners the Blow family. In fact, the phrase has nothing to do with Dredd Scott or Scotsmen.

In reality the phrase is derived from the Scandinavian word "skat" which is a phrase for tax or payment that migrated to Britain and turned into scot. It was levied as early as the 10th Century as a form of municipal poor relief. It was later used to describe a variety of taxes. In fact, the term scot-free means getting away without paying your taxes.

It's interesting how misinformation gathers pace, though. Like the stereotypes of Scottish people being mean. Although Scotland gave us a number of sayings about saving pennies, Scotland apparently now gives more money to charity than the rest of the United Kingdom.

History can commonly distort facts and these distortions are then taken for granted. Take, for example, the claim that the disturbed painter Van Gogh cut off his ear. Recently, a new book claimed he may have made up the story to protect his friend the painter Paul Gauguin, a keen fencer, who loped of Van Gogh's ear during a heated argument.

This is not so say Van Gogh was a more stable bunny than history has hitheto given him credit. Nobody is disputing the fact he then presented his severed ear to a prostitute who then fainted. What a charmer.