I have always been fascinated by islands. They are like a microcosm of the mainland but there is something different about them. They are marooned and cut off. They offer wonder and terror and a glimpse of something else. 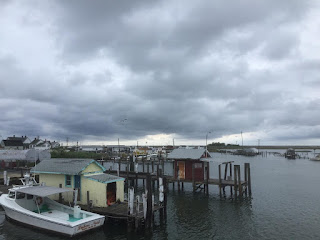 I have written about islands before in I is for Island. We don't need to retrace our steps in the sand, although it's true that the thought of islands takes me back in time to the humming of the boat, the screeching of the gulls and the trip across rocking seas to the desperately remote Farne Islands off the coast of
Northumberland.

Out fascination with islands is rooted in the tale of Robinson Crusoe. Desert islands are places of fascination, dipped in the sweetness of coconuts with an edge of fear to them. Plays and films have depicted people wrecked and trapped from Lord of the Flies to Lost. 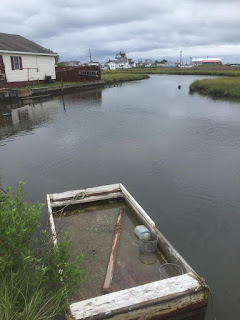 Recently, curiosity took us to Tangier Island in the Chesapeake Bay. Tangier doesn't have palm trees or pristine white beaches or mountains shrouded in mist. It's low and flat and being relentlessly eaten away by global warming. The people on the island talk with a strange dialect that's meant to resemble old English but didn't sound that way to me. In fact, the people are descended from the Cornish who were ever a race apart, although it's hard to see why they would exchange those magnificent soaring cliffs for this brackish flatness. 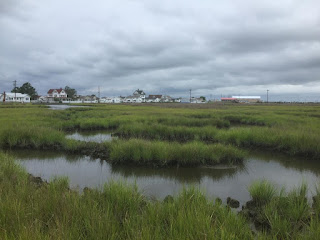 On the day we visited Tangier the rain was falling steadily and the Chesapeake Bay was as dark as iron and as unprepossessing. But the rain slacked off as we arrived at Tangier and the sullen clouds gave the place an edge. The first thing you see are remote crabbing huts perched on wooden walks above the water, places where the solitary menfolk shell crabs above the slick waters of the bay.

Given the twin threats of pollution and global warming, it's a tough existence and many of the homes on Tangier Island are ramshackle and showing their creaking bones against the onslaught of the elements. There was water, water everywhere on the gravel paths fringed with oysters and the pooled yards of homes. 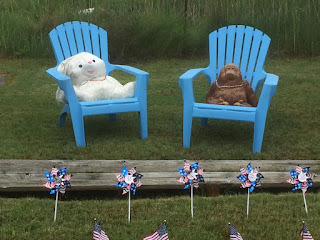 Even today Tangier Island seems far removed from America. It supported the British navy in the war of 1812 and feels somewhat cast adrift.

It was fascinating to walk about for a couple of hours but the alarming proliferation of Trump signs and the fact Tangier is a dry island meant we made doubly sure to catch the last boat out of the place.