I hesitated briefly as I saw the reassuringly thick spine in the library and finally grabbed it from the shelf. Hemingway to me feels like an old friend who can piece together the disparate pieces of my life, who I had half forgotten about long ago. 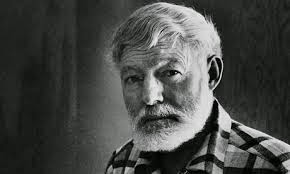 I was staying with an uncle who thought he was clever with his quips, like the time we stood in the men's room on the ferry and he whipped it out and proclaimed: "This is where the big boys hang out" to the disgust of the elderly man in the next urinal. Well the uncle is now the old man and if he was on the ferry the old man and the sea. His kids are adults with their own lives and Hemingway is still the big boy of a certain kind of literary genre, his hunting, fishing, shooting presence looming large over swathes of Florida and Cuba.


Hemingway was a man's man perhaps but he eludes pigeon holing. My next read was For Whom the Bell Toll and nobody who reads about the smell of pine needles and the night the earth moved with passion, can ever write him off as literary red neck.


For Whom the Bell Tolls is in many ways Hemingway's finest piece of work, harking back to the days of the Spanish Civil War and a half-imagined idealism we thought we had left behind. The book is devoted to Martha Gellhorn, the reporter Hemingway left his wife for to embark on another torrid and ultimately failed marriage.


Still there is something alluring about the idea of passion amidst the ruins of an under siege Madrid hotel frequented by the press corps. In the days when the news mattered and no longer rose and fell on the latest Tweet, the Spanish Civil War represented a clash of ideologies and as well as a testing ground for the terrible weapons of war that Adolf Hitler was about to unleash on Europe.


Hemingway's idealism may have been misguided but there is no giant of his stature around today to raise Cain as ISIS unleashes a Medieval barbarity on the land Abel's brother was vanquished to.


Next came A Farewell to Arms, a Secondary School text about Hemingway's exploits in Italy in World War One. The novel is laced with a deep pessimism but is an iconic as the image of a soldier and his girl alone in the rain against the massive ornate eaves of Milan Cathedral.


Years later I introduced A Farewell to Arms to a class of 10th Graders and felt the pessimism of the novel wash over me at the failure to see it induce any spark of interest in the computer game infected eyes of the young.


So perhaps that was it. Hemingway is an anachronism with no value to the modern world. He's a passing fancy and a reason why men wear false beards in Key West.


I also read The Sun Also Rises as it moves from Paris to Spain, laced with booze and the existentialism of the Lost Generation, but curiously alluring and fascinating. I cannot read the novel without yearning for Paris or Pamplona and the warm breeze and smell of the Mediterranean.


The other brushes with Hemingway were non literary such as the brief visit to La Floridita bar in Havana where he sobered up on daiquiris after a morning of writing and chain drinking whiskies.


Hemingway blew his brains out in the end in Idaho of all places - far from the Tropics and far from Spain. He is long gone but not forgotten like my memories of his prose. I'm looking forward to revisiting For Whom the Bell Tolls.

It's hard to believe the iconic Bruce Springsteen song Born in the USA is 30 years old. The year was 1984 and I distinctly remember the powerful riff and belting lyrics along with a image of blue jeans and the American flag that seemed to make this a tub thumping, jingoistic song that made me feel distinctly uneasy. 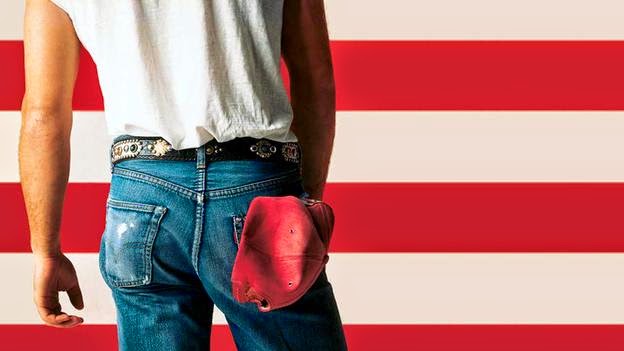 In 1984 female protesters were chaining themselves to the gates of RAF Greenham Common in protest at the arrival of American cruise missiles, while miners were fighting pitched battles in the streets of northern towns as the Conservative government sought to dismantle the mining unions. It was tempting to see everything in terms of black and white and left and right and to believe Britain was on its way to becoming the 51st state of the USA.

Springsteen's song appeared to be more of the same, a none-too-subtle celebration of American triumphalism.

One of the song's biggest fans was George Will, a conservative columnist who hailed it as a "cheerful affirmation" of all of the good things about America. His pal Ronald Reagan who happened to be President at the time was impressed and he referenced Springsteen and his song of hope during his re-election campaign.

In reality Reagan was fooled by the upbeat nature of the song. If you delve into the lyrics, it quickly becomes apparent that Born in the USA is ironic and about the emptiness of the American dream from the perspective of a Vietnam veteran.

Down in the shadow of penitentiary
Out by the gas fires of the refinery
I'm ten years burning down the road
Nowhere to run, ain't nowhere to go
Born in the USA

A BBC article pointed out Springsteen's song isn't the only one to be misinterpreted. You may not want to play Every Breath You Take by the Police at your wedding because it's about the stalkery kind of love. Nor Does REM's The One I Love go down in the annals of top romantic songs as it contains the line: "This one goes out to the one I’ve left behind/A simple prop to occupy my time."