Heard The One About the Country that Elected an Overgrown Angry Duck as President?

The other day I was waiting for a pizza in one of those places that blur into those other places where you wait for pizzas when a scrawny man with dubious hair almost pushed me across the well-trodden floor and started yelling at the girl behind the counter.

"I ordered sausage on this pizza. Can't you see there's no sausage?"

He pulled savagely at the box, almost sending the pizza flying to the floor. 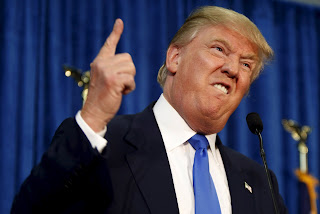 The girl made the mistake of telling him she thought she had just seen a piece of sausage.

The man pulled himself up by his narrow shoulders and let her have it with both barrels, figuratively speaking. The girl hastily told him she would order another.

The man was sighing and muttering. "And how long is that going to take?"

The girl disappeared from sight at which point the man started pulling out his receipt and muttering to a bedraggled woman by his side that he'd been ripped off and would never come to this f... place again.

The exchange reminded me of the fact America seems to be rather angry right now for no real reason. Disgruntled workers shoot up their offices, people occupy federal buildings and Uber drivers commit mass murder in between picking up fares.

The great news is we finally have something we can do about it. There's a guy with a great shot at being President who can sort out all of these problems with a few swift punches to the face. Or a great big wall. It's quite awesome really. JFK taught us it helped to be handsome to be President, Reagan to be charming and Barack Obama to be an inspirational speaker. In contrast, Donald Trump looks like an oversized duck fresh out of a nuclear reactor and isn't so subtle about wanting to up shred the Constitution.

When Trump becomes President, we won't just be able to get angry with the girl in the nameless pizza place. We'll have the right to punch her in the face, and probably get a commendation if she's Islamic or Mexican along with a luxury waterboarding break at Trump Towers. Way to go America.

A Wedding in Syria Provides a Rare Glimpse of Hope

If like me you recall wedding days with a mixture of disbelief and affirmation that this was indeed the first step on a very slippery slope filled with arguments about unwashed dishes, you might not want to look too closely at the following picture. 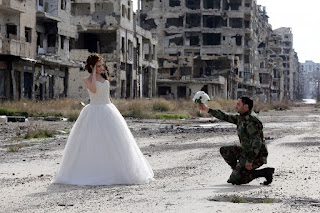 The year is 2016 and the wedding took place in the Syrian city of Homs. Four long years ago in February 2012, the Syrian army surrounded and laid siege to Homs. trapping 3,000 civilians and 4,000 rebels inside. Homs has been an urban wasteland for four years. This is an image of Homs before the civil war set against a contemporary one.

It's hard to comprehend the scale of horror that is modern-day Syria. Suffice to say what appeared to be a popular uprising against the dictator Assad, quickly became the most terrible war of the millennium.

The most troubling aspect of this war is there is no silver lining. Back in 1939 at least it was easy to separate the good guys from the bad guys. Although war brutalizes all round, you don't need to be a history buff to realize the regime that tried to wipe a race off the face of the earth was clearly on the dark side.

In Syria, it's hard to draw any lines. The West initially supported a rag tag of rebels, some of them too closely affiliated to Al Quaeda for comfort. Then part of the rebellion morphed into the evil that is ISIS. Meanwhile, the Assad regime has continued to kill and torture and drop chemical weapons on its own people. Today with the support of the Russians, there's some kind of bloody endgame in sight, as the Assad regime looks poised to capture what's left of Aleppo. Our Western ideals seem terribly inadequate as the dictator reasserts his power. And the scary thing is it's not the worst possible outcome. The Syrian conflict has again highlighted the deadly schism between Sunni and Shia Muslims - represented collectively by America's favorite Middle Eastern country Saudi Arabia and Iran, two regimes that arbitrarily execute their citizens and impose a wide range of Medieval punishments. In many ways little has changed since the brutal Iran-Iraq War of the 1980s that left about 1.5 million people dead in a World War One style stalemate.


The brutality of the war in Syria has reminded us that we need every 'feelgood' Kodak moment we can find. The 21st Century doesn't feel like a place for diplomacy. Right now Vladimir Putin is 3-0 up against Obama and intolerance is on the march. We need all the love we can find; even in the most inhospitable of places.
at February 10, 2016 2 comments: