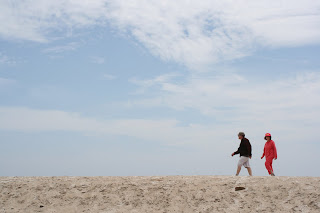 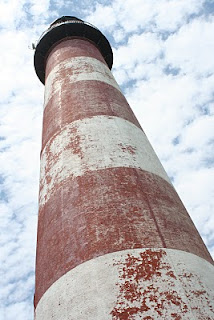 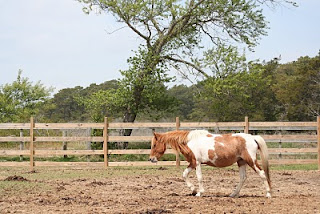 I have been meaning to blog about Chincoteague Island ever since we returned from a weekend away, but have been seized by inertia and a lack of enthusiasm.
That's not to say Chincoteague is not interesting but, to be fair, neither is it Venice. It's not even Sienna.
When you have lived for a while near the coast of North Carolina, barrier islands cease to be a novelty. Even wild horses, the signature attraction of Chincoteague, are less of a novelty when your beat has been Corolla and the northern beaches of Currituck County, roamed by the descendants of Spanish mustangs.
Of course we went through the motions and ensured Zara was clutching her copy of Misty of Chincoteague as the low green marshes that usher in the approach to the town, appeared out of nowhere.
I promised to read her the novel, but like most of the best laid plans, got sidetracked by one of those large bottles of Pinot Grigot that cost less than $10 at Food Lion and taste better on the third glass than the first.
I still have no clue who Misty was and little indication to find out. I assume she's dead as there's a kitchy little statue in the town. Our hotel displayed a bill board for the movie that dates from 1961, an era when movies were feelgood affairs in which avulcular grown ups patted kids on the back, a drama comprised getting lost in the wilderness and nobody would ever dream a producer would one day make a movie like Seven where a detective finds his wife's head in a box in the final scene.
Still Chincoteague is in something of a time warp. I'd like to bet it boasts few paid up members of the Bloods and the hotel manager had a blue rinse from yesteryear along with an archaic attitude that her purpose in life was to sort out our dinner plans.
We didn't mind too much. Being lazy is part and parcel of being on holiday.
Unfortunately, I also have a competing urge to follow each dotted line that denotes a walking trail on the map to its logical and waterless end. I planned to hike all the way to Maryland, a state that I'm told is owned by the Catholic Church and requires one to whip out the rosary beads to gain admittance.
The requirement was moot. In the end I never walked further than reception to get towels for the swimming pool, although the water was too cold to venture into in May.
On Sunday we drove to the Chincoteague National Wildlife Refuge. Our first question to the staff at the visitor center was clearly a new one on them.
"Where can we see the wild horses?"
Resorting to auto pilot mode they pulled out maps and gave a spiel on the best time to see the horses in the wild. But they advised us against using the trails because the mosquitoes were "bad."
I resisted the tempration to quip: "So when are the mosquitos good then?"
Apparently recent rainfall had boosted their numbers and dimensions and they were almost as big as the horses.
Still we drove around, paranoid about opening the car window, until we came to a paddock where some wild horses were wandering around aimlessly.
Frankly seeing wild horses in captivity in the wild is no more interesting than seeing horses on a farm, but at least I was able to convince Zara that one of them was Misty, which was another advantage of not reading the book.
After that we made a half-hearted attempt to lie on the beach, but the clouds came racing over right on cue. I visted the lighthouse that again in 2009 received the "America's Lighthouse Most Deserving of Paint award."
Then it was off on the real business of the day; eating.
The ice cream parlour was something of a disaster. Zara's double chocolate affair, heavily spooned over a tiny cone like a mushroom cloud, began to melt about 4 seconds after delivery and I was paralysed in convulsions of laughter as it ran down her arms onto the table and all over her new outfit.
My wife didn't see the funny side. I went away rather glad that Jackson is still a baby and thus ineligible for lopsided ice cream cones.
Other than that the only highlight on the trip back down Virginia's Eastern Shore was passing a grim, festering trailer park, implausibly named Dreamland, that houses Hispanic workers at a hulking chicken slaughtering plant nearby.
Weekends in Chincoteague may not be the building blocks of the American Dream, but suddenly we felt like Misty's half sister Lucky of Chincoteague.
at May 05, 2010